Nick Borga is ready to step up as the next featured back in No. 19 Joliet Catholic's heavy running attack. 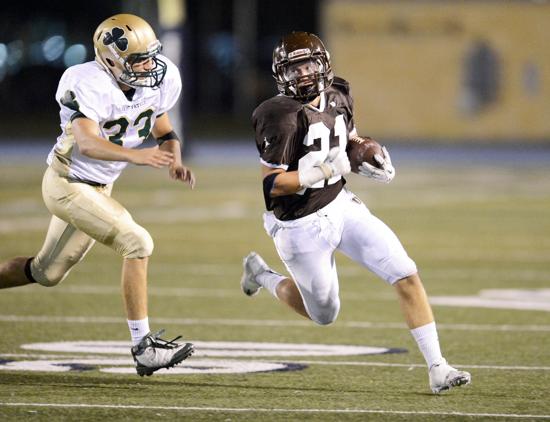 At a school that has produced some of the state's best running backs in recent seasons, Nick Borgra is the next man up.

The Joliet Catholic senior's immediate predecessor as the Hilltoppers' featured back was Michael Ivlow, who averaged more than 10 yards a carry last season en route to piling up 2,359 rushing yards and 29 touchdowns.

Before him, there was 2011 Sun-Times Player of the Year Ty Isaac and Josh Ferguson and Malin Jones. It's quite a tradition to live up to, but Borgra is ready for the challenge.

"Mike helped me so much," he said of Ivlow. "It was a real privilege watching him. He had my back, teaching me everything I hope I can teach to my underclassmen.

"I want them to look up to me as I looked up to Ivlow."

Borgra almost reached 1,000 yards himself last season, finishing with 951 and 13 touchdowns on 126 carries. He'll be expected to play a starring role this season as the Hilltoppers — No. 19 in the Sun-Times Preseason Super 25 — look to contend again in the East Suburban Catholic Conference and make a run in the Class 5A playoffs.

"Nick is a little bigger, stronger, faster than he was last year," Joliet Catholic coach Dan Sharp said. "That year of experience really helped him.

Along with top-shelf backs, the Hilltoppers and assistant coach Dave Douglas also have a reputation of turning out big, strong offensive linemen who help keep the chains moving. That trend doesn't show any sign of ending, either.

"The guys up front, they're looking really good," Borgra said. "We only have one senior on the line. The other juniors getting time were learning from those big guys last year."

Also coming back with some experience on offense are junior quarterback Cade Earl, who threw for 388 yards and three touchdowns as an injury replacement last season, along with senior fullback Drew Voss and junior wingback Michael Johnson.

"He came in as a sophomore and the thing I was very impressed with was his whole demeanor," Sharp said of Earl.

Since then, the coach has liked Earl's offseason efforts to strengthen his arm and increase his accuracy.

Borgra is also impressed: "He definitely was born to be a quarterback. He knows the [play] book better than any senior on the team."

Though the Hilltoppers have been an elite program for a long time, they've had some hiccups on defense in recent seasons. But that unit looks solid this fall, with returning mainstays Brad Krisch (66 tackles) and Mike Gruben (79 tackles) at linebacker, Brandon Bolek (29 tackles, 5 interceptions) in the secondary and Ken Aguirre (38 tackles) on the line.

Some of the offensive linemen will rotate through on defense as well, partly out of necessity.

"The only thing I'm concerned about, we're low on numbers," Sharp said. "That creates a problem depth-wise."

There could be as many as a half-dozen players going both ways. "That's unusual for Joliet Catholic, but that's the way it is," Sharp said.

Something else out of the ordinary at the high school level, but in a good way, is the presence of an exceptional kicker in Brian Bravo. The senior converted 51 PATs and kicked four field goals last season.

It all adds up to what could be another winning combination for the Hilltoppers, who have won six state titles in Sharp's 17 seasons.

Nothing new there — or in that the Hilltoppers have a high-caliber back.