Steven Frank looks to lead Oswego to another big year

Expectations may be ramped up even more this season for Steven Frank, but No. 22 Oswego’s touted junior quarterback feels he’s prepared for them. 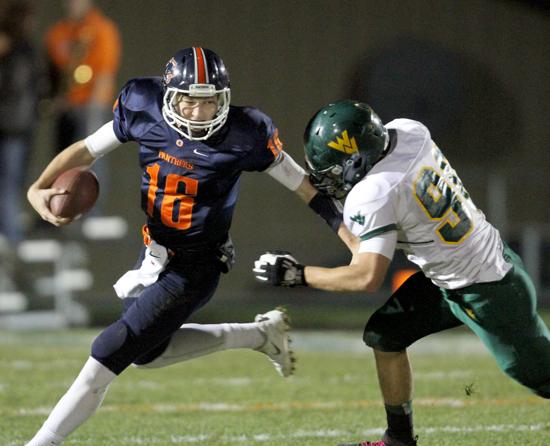 Expectations may be ramped up even more this season for Steven Frank, but No. 22 Oswego’s touted junior quarterback feels he’s prepared for them.

“There’s a lot more on my shoulders, but I think our running backs will be able to help carry the load, too,” he said. “We’re always going to have a good running game here.”

The 6-4, 210-pound Frank, who got his first scholarship offer from Illinois State as a freshman, will be in his third season on varsity. He threw for 1,950 yards (27 touchdowns, 10 interceptions) and had a 92 quarterback rating last season, leading the Panthers to a 9-3 record, Southwest Prairie Conference title and quarterfinals of the Class 8A playoffs.

“I thought it was pretty good for a sophomore, but I want to be more consistent,” said Frank, who completed just 48 percent of his passes, 110-of-246.

He now has offers from Miami of Ohio and Illinois as well.

“(Recruiting) is stressful sometimes, but I’ve just tried to have a good time with it,” Frank said. “You have to remember there are a lot of people who would want to be in your shoes.”

Oswego lost to graduation running backs who accounted for nearly 2,000 rushing yards in Tyler Walsh (1,322) and Bryce Holm (604), but returns an experienced offensive line well-equipped to open holes for a trio of backs headed by senior Treshon Weddington and including Tommy Tripp and Eric Vargas.

“I think the offensive line will be the strongest part of the team,” said Frank, who looks to make new connections in the passing game.

Senior Zach West, who led Oswego in receiving with 40 catches for 723 yards, hasn’t come out for football to focus on basketball.

Players who accounted for 89 percent (98-of-110) of Frank’s completions last year are no longer around to be targeted.

However, tight end C.J. Brown and fullback Connor Cavins return and 6-6 Brice Robinson and 6-4 Joe Hennessy should be easy to find.

Meanwhile, strong safety Mason Memming is the lone returning starter on a young defense likely to be led by senior middle linebacker Zach Hegseth, a first-year starter with a 4.0 grade-point average.

“He was behind (four-year starter) Bryce Holm,” Cooney said. “And we’ve got a lot of guys like that ready to take their turn.

“It’s a cornerstone position. He’s gotta know his responsibility, what’s going on in front and how the pieces fit together behind him. It’s nice to have someone who can cognitively go with those switches as quick as (Hegseth) is able to.”

Pressure will be on for Hegseth early, just like Frank, especially when the opening, nonconference schedule features defending 6A state champ Batavia and Waubonsie Valley.

“From freshman to sophomore year there was a tremendous spike in (Frank’s) ability, his confidence and control, so we were able to open things up a little more,” Cooney said. “We’re seeing the same type of spike this year.

“He’s becoming more vocal and his leadership is coming around. Everything else — mechanics, speed, arm strength and accuracy — have improved. And that’s not just by luck, the kid works his tail off.”