Immaculate Conception has been named a recipient of the American Volleyball Coaches Association (AVCA) Team Academic Award for the 2012-2013 seasons. 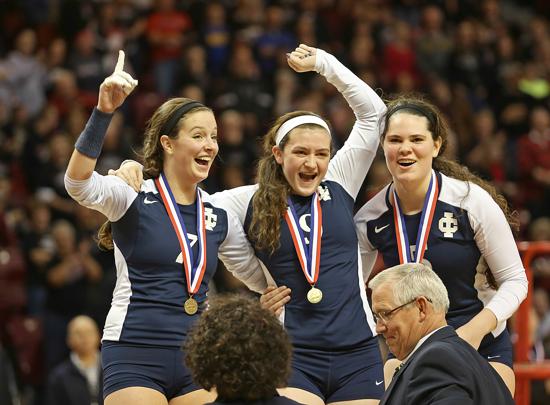 Although schools north of I-80 won all four state volleyball titles last year – Mother McAuley (4A), St. Francis (3A), Immaculate Conception (2A) and Keith (1A) –there is volleyball beyond the Chicago suburbs and Rockford and south of the interstate.

There are several teams from central and southern Illinois that could be factors in this year’s state title chase, particularly in the big school arena where Normal Community and Normal Community West could play havoc on the bracket.

Anyone who watched Normal’s 25-18, 25-20 loss to Benet in the 4A supersectional last year knows that the Ironmen (28-11 a year ago) could be the best team to come out of central Illinois and the first since Quincy in 2009 to reach the 4A semifinals.

Coughlin, Leonard and Peoples were members of the Illini Elite 17 Cardinal team that finished second at AAUs in the 17 Open division.

But if Normal doesn’t get there, it’s probably because they were done in by crosstown rival Normal West. The Wildcats (29-4 last year) won the Big 12 Conference title, the Bloomington/Normal Intercity Tournament and the Kaneland Spikefest in 2013.

They just couldn’t get past Normal in the regional championship.

You have to feel for La Salle Peru.

But the Cavaliers return most of their starting lineup from last year’s 35-4 team and look to earn another trip to Bloomington. Key for coach Mark Haverkorn is 5-11 junior outside hitter Taylor Gibson, an AAU All-American who helped lead Illini Elite 16 Black to second place in the Club division in Orlando.

Gibson had 268 kills and 68 aces for the Cavaliers as a sophomore. Also back from last year are 5-10 outside hitter Shana Puetz, 6-foot middle hitter Ellie Senica and 6-foot rightside Cierra Johnson.

“We return a good nucleus of players,” Haverkorn said. “We expect to be very competitive this year.”

A team from southern Illinois that could make an appearance in the 3A semifinals is Columbia.

Columbia, which reached the Class A finals in 2006 two years before the state went to four classes, was upset in the regional semifinals by Mascoutah 25-11, 25-22 in 2013. Mascoutah advanced all the way to the supersectional before losing to Breese Central.

Last season was an extremely difficult one for perennial state power Breese Mater Dei. Legendary coach Fred Rakers, who guided the Knights to six state championships and had a career record of 1,046 wins, 200 losses and seven ties, lost his battle with cancer shortly after Mater Dei lost in the regional finals to Breese Central.

“We, the Mater Dei volleyball family, hope to keep his memory and his program alive and well through our hard work and effort in the gym and in our daily lives,” said Mater Dei coach Chad Rakers, Fred’s son, who succeeded him as coach after the elder Rakers won his last state title in 2010. “We will never forget and we will never stop fighting.”

Morris isn’t exactly known as a hotbed of volleyball talent. The Redskins have never advanced to the state finals in any class. But Morris came close in 2013, losing in the regional finals to LaSalle-Peru 25-9, 25-27, 28-26.

Things were looking up for Morris this season until …

“We have had two seniors with season-ending injuries this summer,” coach Jackie Litwiller said. “So our outlook has changed slightly. We are working hard with our lower levels to see if anyone is ready to join us.”

But the key to the Redskins’ success this season will be 6-foot outside hitter Kaylin Korte, who has verbally committed to the University of Illinois. Korte led Morris in kills during the Redkins’ 19-win season in 2013.

“We will continue to work hard all season to see what combinations of players will work the best for the current situation we are finding ourselves in,” Litwiller said.

Deer-Creek Mackinaw, which won the Class 2A state title in 2012, lost to Immaculate Conception in last year’s semifinals 25-22, 25-17 and finished third at 37-2. But another member of that Illini Elite 17 Cardinal team could lead the Chiefs to the winner’s circle again in 2014.

Lauren Anderson, an all-everything selection who will be headed to Lipscomb, is back for one final run at a state title. Last year, the 5-10 outside slugger pounded out 350 kills and 75 aces for the Chiefs.

“We’re looking to have another strong year,” coach Brandon Mueller said. “We have four returning starters and have a few new girls looking to fill into some big roles. It is going to be an exciting year full of a lot of challenges.”

In Class 1A, look for last year’s surprise team from New Athens and a familiar face in Mt. Pulaski to challenge for the state title.

Mt. Pulaski, which lost in the championship match to Keith Country Day in 2012, was ousted from the 2013 tournament in the sectional finals by eventual third-place finisher West Prairie in a marathon match 25-20, 28-30, 25-21.

“We will be a taller team with some experience,” said veteran coach Donna Dulle, who has guided Mt. Pulaski to 12 state trophies in her 33-year career. “Maddy should be great at the net.”

Immaculate Conception is on a roll. And it’s got nothing to do with last year’s IHSA Class 2A state title. It’s all about what Knights' players do in the classroom.

Immaculate Conception has been named a recipient of the American Volleyball Coaches Association (AVCA) Team Academic Award for the 2012-2013 seasons. The Knights has been honored with this award 21 times (out of the 22 years the award has been presented).

“I believe we may have received this award more than any other high school in the nation,” said IC coach Nancy Kerrigan D'Amore. “If not, we are in the top two or three.”

The award, which was initiated in the 1992-93 academic year, honors collegiate and high school volleyball teams that displayed excellence in the classroom during the school year by maintaining at least a 3.30 cumulative team grade-point average on a 4.0 scale.

The mission of AVCA, which is headquartered in Lexington, Kentucky, is to advance the sport of volleyball with AVCA coaches at the epicenter of leadership, advocacy and professional development.