There is no lack of optimism at St. Edward

It usually takes very little to fuel the fires of optimism in St. Edward football coach Mike Rolando, so he’s had a full blaze going since well before summer workouts started. 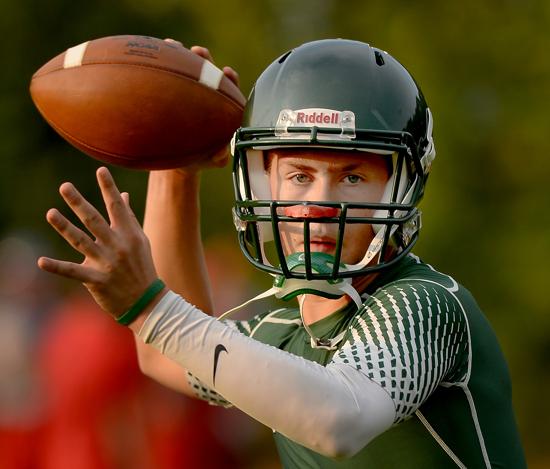 It usually takes very little to fuel the fires of optimism in St. Edward football coach Mike Rolando, so he’s had a full blaze going since well before summer workouts started.

Add in the fact St. Edward now plays in the Metro Suburban East against a schedule of more similar-sized opponents, and it’s easy to see why Rolando says, “It’s the best position we’ve been in coming into a season in 10 years.”

The defense figures to be just as strong as the offense. The Green Wave goes with four seniors across the front in tackles Kasey Cook and Dan Howell and ends Brandon Ostrander and Josh VonRohr. There is as much experience among linebackers with three returning starters: junior Jake French and senior third-year starter Jack Tierney outside and senior Chris Kelly in the middle.

Only in the secondary is there raw inexperience with freshman corner Saveon Smith, but also raw talent. On the other side is returning sophomore starter Dwayne Allen, and the safeties are Dan Favela and Devin Warner, both seniors with varsity experience. Santos Gomez and David Groves back up the young, speedy corners. Favela, at 6-2, gives opponents a reason to reconsider throwing deep.

“You need that height when you’ve got so many 6-4 and 6-3 receivers these days,” Rolando said.

“He established himself as our leader and No. 1 since our indoor league in spring at Lake Barrington,” Rolando said.

Although Rolando calls Allen “like lightning” in the open field, he says the junior also can run with a surge on the interior.

“We have a lot of two-way starters, but the thing is we’ve got a lot of reserve players with experience who can fill in and help keep guys fresh through the fourth quarter,” Rolando said.

One key reserve will be Bryan O’Neill, the backup quarterback who can play multiple offensive and defensive positions and may even help as a spot starter.

“We’ve got a lot of weapons but the whole key will be how fast they become a team,” Rolando said. “Everybody has to get comfortable with the idea of helping other people be successful and doing their part to help each other’s success rather than their own success with the ball.

“If they grasp onto this, and get excited about everyone else’s success, we can be dangerous.”