With 15 returning starters, Brother Rice has the experience to make a deep playoff run after a disappointing 3-6 campaign last season. 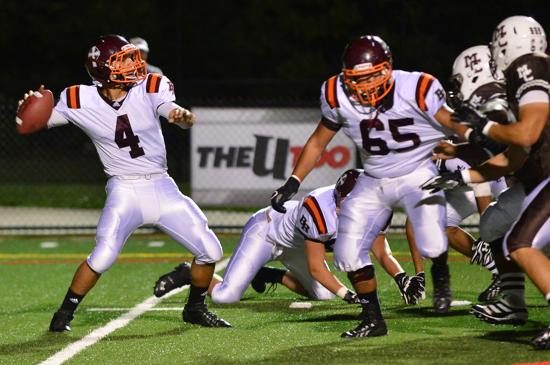 Brother Rice finished 3-6 during the 2013 regular season, but that hasn’t prevented expectations to soar in ’14.

Much of the optimism stems from a wealth of experienced players and, of course, skill. The Crusaders return 15 starters, including four players who have spent three years on varsity: Quarterback Alex Alarcon, running back Marcus Jones and offensive linemen Pat Hosty and Dan Barry.

Add defensive linemen Michael McGinley and Robert Woods, along with kicker Spencer Scott, and Brother Rice has the pieces in place to make this season a memorable one.

The Crusaders clock in at No. 9 spot in the SouthtownStar Preseason Top 10.

“We’re excited about this season,” said coach Brian Badke, who’s beginning his third season. “We have a lot of experience coming back. We have good depth. The kids are very motivated. We expect to compete for the conference championship and make a playoff run.”

This much is for certain: The Crusaders’ schedule is brutal, undoubtedly one of the toughest in the Southland. They open on the road against sister school, nine-time state champion Brother Rice (Michigan), which has won three consecutive state titles and 22 straight games.

“We know what we’re up against, but we’re up for the challenge,” said Hosty, who ranks No. 2 in the senior class and scored a 34 on the ACT. “We’ve been working extremely hard. It’s a tough schedule, but we’re going to take care of business.”

The offense has the makings of a juggernaut, boasting the pieces to optimize the potential of Badke’s spread-style attack. Alarcon (5-11, 190) piled up close to 2,300 all-purpose yards and Jones (5-8, 185), who committed to Northern Illinois, has the ability to run around or through defenders. Alarcon has a host of targets at receiver, led by seniors Jack Desmond and Zach Hayes, junior Julian Blain and sophomore Ricky Smalling, who recently earned a scholarship offer from Virginia.

“We have some depth at receiver, and having Alex and Marcus back is huge,” Badke said. “The offense has the ability to be explosive.”

The Crusaders shouldn’t be too shabby on defense, either. Seniors McGinley (6-1, 250), Woods (6-foot, 215) and Kevin Furlong (6-3, 200) have the means to apply pressure on the quarterback. Seniors Greg Bernier and Jimmy Opoka and sophomore Iben King form a stellar trio at linebacker, while junior twins Bryan and Jordan Boyd are keys in the secondary.

Rice is highly motivated after last season’s subpar campaign. Hosty remembers the disappointment and sadness on the faces of those seniors.

“The seniors were heartbroken last year,” Hosty said. “I don’t want that feeling. We’re emphasizing to the younger kids that high school football has an expiration date. Once you’re a senior, it’s over.

“If our whole team puts their mind to it, there’s nothing that can stop us from achieving our goals.”