It wasn’t a strong start for Homewood-Flossmoor’s Jack Mulligan at the 20-team T.F. South Invitational on Tuesday. His finish, though, was a different story. 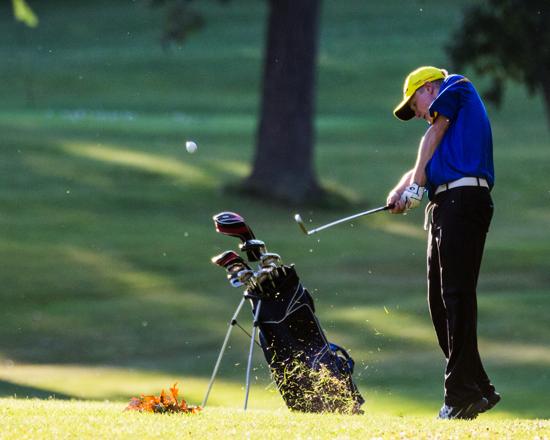 Crete-Monee's Joe Dispain works his way out of the trees on the seventh hole at Balmoral Woods Country Club. | Jim Karczewski/for Sun-Times Media

It wasn’t a strong start for Homewood-Flossmoor’s Jack Mulligan at the 20-team T.F. South Invitational on Tuesday. His finish, though, was a different story.

“I didn’t start very good at all,” Mulligan said. “But I made a birdie on the last hole and I made a good par save on the second to last, so I finished decent.”

It was a better conclusion than he thought. Mulligan’s last two holes helped Homewood-Flossmoor lock up the tournament crown at Balmoral Woods Country Club after a rain delay pushed tee times back 45 minutes. The Vikings registered a 328, outlasting Bradley (329) and Sandburg (330).

“I’m definitely enthusiastic about the way the kids played,” Homewood-Flossmoor coach Chris Stiglic. “The course played tough. I’m pleased to see the progress from this year to last year.”

Mulligan finished with a 6-over 78, which was good for third place in the 93-person field behind Kankakee’s Eric Marcotte (72) and Bradley’s Ryan Ponton (76).

Sandburg, the invite’s three-time reigning champion, received top-10 finishes from John Calzeretta (81), Austin Wojtczak (81) and Will Schieber (82). Coach Jeff Kwilose said he was “happy with the guys” after the Eagles graduated nine of 14 players from a season ago.

Other top-10 finishers included Beecher’s Michael Barber (79), Rich East’s Caleb Warner (79) and Argo’s Richie Kaszuk (79). Kaszuk, a senior, said it was his best finish ever after first picking up the sport as a freshman.

“I had no experience whatsoever when I started as a freshman,” Kaszuk said. “It feels pretty good. I never actually placed in a tournament, so I’m pretty excited about that.”

Kaszuk said he improved 41 strokes from his first tournament as a freshman compared to his result at Balmoral Woods on Monday.

T.F South's Maggie Sloan finished 19th with an 86. Sloan plays the regular season with the boys. She finished 12th in state last season among the girls.