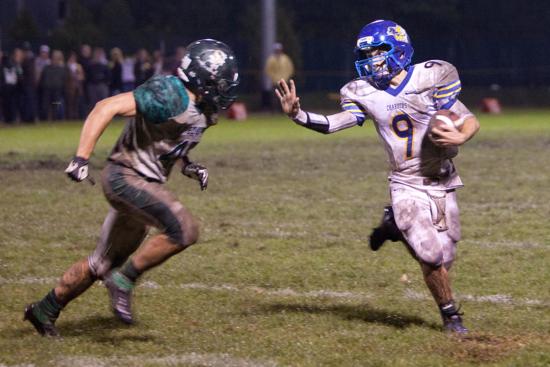 Sidelined all of the 2013 season with a torn ACL, the Aurora Central quarterback watched with glee last October as his teammates beat Marmion in the rivals’ final Suburban Christian Conference meeting. It clinched the Chargers’ second straight playoff appearance after a 15-year drought.

“Even though I wasn’t on the field, that’s the most fun I’ve ever had in football,” Rahn said. “Being a senior now, I can’t explain how bad I want it.”

Rahn and the Chargers program will look to take steps forward this fall, but do so in almost a whole new world.

Notably with the Suburban Christian no longer in existence, Aurora Central is joining the likes of Glenbard South and Riverside-Brookfield in the Metro Suburban West. The Chargers graduated 27 seniors off a 6-4 team, among that group All-State running back Julian Rios, conference lineman of the year Eddie Gonzalez and two-way starter Cody Ekstrom.

“There are a lot of unknowns,” said fifth-year coach Brian Casey, speaking specifically of the new league. “I think we have the talent to compete.”

That starts under center. This Chargers offense won’t resemble past models, and Rahn is the reason why.

Rahn ran for 600 yards and threw for close to 400 in eight games as a sophomore, and with his return last year Casey expected to open up and run a hybrid of the traditional double wing. Then Rahn tore his ACL during a non-contact drill in July 2013.

Now Rahn is back, and the Chargers’ offense has again bee redrawn as more of a spread.

“If you watched our offense last year you would have thought you were back in the 1960s,” Casey said. “This year we can go back to what we thought would be successful.”

It’s hard to underestimate the dynamic Rahn brings to the Chargers attack, so Casey won’t.

What the Chargers do not have is the depth of recent years.

Roman Padilla, who ran for close to 300 yards and had 60 tackles last year, will start on both sides of the ball. Jeff Kus returns to anchor both lines and Ben Ariano, second on the team with 85 tackles, is back at linebacker. Colin Baillie, who had six catches last year, is the top receiver back off a team with 12 total starters returning.

A potential home-run threat is senior Brandon Babler, who sat out the last two years to concentrate on basketball.

A third playoff berth would translate as a trend Casey is trying to build in Aurora.

“The expectation is to continue to build on the legacy that the guys before them have started,” Casey said. “We’re playing for their memory and legacy.”