After 15 years as a head coach, former Brother Rice and York skipper Steve Nye is relishing his new role as Montini assistant. 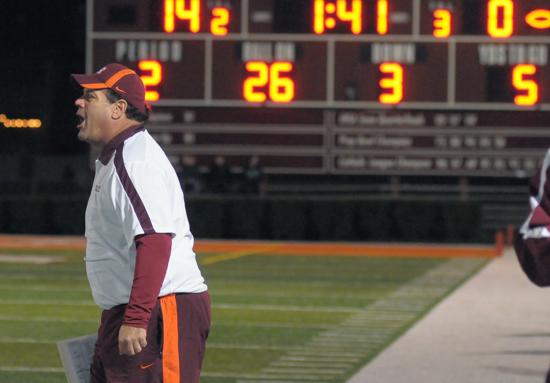 For the first time in 15 years, Steve Nye isn't a head coach.

He's ok with that.

Just months after losing his job at York, there's no hint of bitterness in his voice, no overwhelming desire again to guide his own program.

Nye's actually enjoying the life of an assistant coach, free of the stressful head coaching duties that have nothing to do with making kids better football players or better men.

After 13 years guiding Brother Rice and two at York, Nye currently is an assistant at Montini.

"I'm kind of enjoying not seeing my name in the newspaper," said Nye, who also is an assistant dean of students at Montini. "Being out of the spotlight is a good thing. I'm grateful for the opportunity I have at Montini. I'm really enjoying coaching for the reasons why I decided to do this. The responsibilities of a head coach take you away from the reasons you got into coaching."

At Montini, that means coaching the offensive line. Rice fans might find some amusement in that, knowing his passion for defense. In fact, Crusaders fans' biggest objection to Nye during his tenure was his unwillingness to open up the offense and pass the ball more frequently.

"I was always on the defensive side of the ball, now I'm on the offensive side," he said. "It's good to see how other people do things. To watch the approach Montini takes. I'm part of an offense that throws the ball 45 times a game. It's a different philosophy than I had."

He needed a fresh start and took over at York, knowing the program was in need of rebuilding — though, not to the extent of going 0-9 in his first season. In season two, there was moderate improvement to 3-6. Along with the sophomore team finishing 6-3 and the freshmen 9-0 in '13, Nye was confident the program was headed in the right direction.

And that may be true. It's just that he won't be around to see it. Nye was aware when he accepted the job that there was the risk of not being around. He was the only faculty member in York's business department without tenure. So if there ever came a time when someone had to be let go or riffed, Nye likely would be the guy.

"It happens," he said. "The disappointing thing is that you planted all the seeds and you're not going to see them come to fruition. I did things for the long-term benefit of the program. I didn't bring up any sophomores or freshmen to varsity to get an extra win or two. I wanted to keep them together. But you can't dwell on it. You have to move forward, which I've done."

There are a handful of local coaches who have had the experience of being a football head coach at a private and public high school, Nye being one. I asked him if either situation provides an advantage to building a successful program. Public school supporters point to a private school's ability to recruit from a 30-mile radius as one such advantage. Private school supporters counter with the sheer number of students public schools draw from as their advantage.

"They both have their challenges," Nye said. "It comes down to the school. When you're at a private school, you have to visit 40 different grade schools to get kids. At a public school, you can build a great relationship with the feeder programs and have them running your system since the fourth grade. It depends on the individual and the institution, not really whether you're at a private or pubic school. The one thing they have in common is you have to work tremendously hard."