With five Division I prospects on the roster for the 2014 season, No. 17 Nazareth looks to make an extensive playoff run. 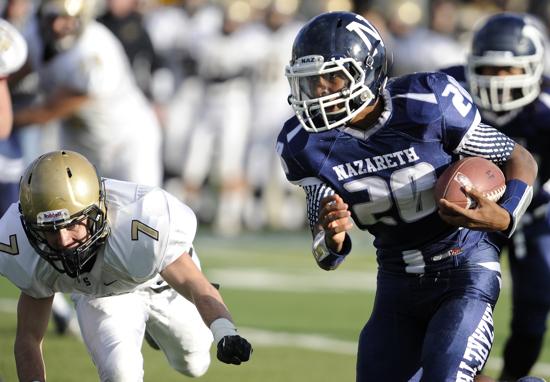 When it comes to respect, there's a lot more heading Nazareth's way now than there used to be.

"When I came, we were everyone's homecoming game," said coach Tim Racki, who is heading into his 10th season. "That's no longer the case."

And college recruiters are making LaGrange Park a regular stop on their itinerary — five Roadrunners have Division I scholarship offers.

But there is a flip side. Before its current run of three straight winning seasons — a feat the program previously hadn't accomplished since the late '90s — Nazareth finished with seven losing records in nine seasons.

And they've only won one playoff game since 2011. So Racki doesn't want the Roadrunners — No. 17 in the Sun-Times Preseason Super 25 — to get too far ahead of themselves.

"It's called 'the cheese,'" senior linebacker Dan Batkovich said. "We're not supposed to take it."

"It's always good to have the talent, experience, depth — which we're not used to having around here," Racki said.

But with all that comes hoopla and the coach doesn't want the distractions to get in the way of the task at hand.

"They're not used to the preseason hype and [scholarship] offers," Racki said. "It's a balancing act with these expectations on these kids. It's almost like the focus is on the college level. My job is to make sure they have fun."

If the Roadrunners fulfill their potential, that shouldn't be a problem.

Start with the offense which, as usual for Nazareth, will have plenty of contributors. Back are the top two rushers from last season: junior Julian Love (598, 6.6 per carry, 10 touchdowns), who has an offer from Illinois, and sophomore Ivory Kelly-Martin (595 yards, 5.2 per carry, 7 TDs).

"Ivory and Julian is just complete athletes," Batkovich said. "They have so many skills. Julian, from running back to wide receiver to cornerback. Ivory, he's got a big future."

"The one great thing about this team is it's a high-character team," Racki said. "They understand we have a lot of skill and there's only one football."

Senior Kevin Jackson, who has an offer from North Dakota State, is among the receivers who could be targeted by Bartels and Beauduy. Love's another option in the passing game.

There's talent on the defensive side as well with Batkovich (69 tackles, 9.5 tackles for loss), linebacker Decx Kelly-Martin (68 tackles, 5 sacks, 5 tackles for loss) and Jackson (76 tackles, 6 interceptions) and Love (43 tackles) in the secondary.

"We have more corner depth than we've had," Racki said.

So the talent is there, across a number of positions.

"I mean, he's right," Batkovich said. "Coach is saying, 'What have you guys done? You've only won one playoff game.'

"Hopefully, we'll live up to this hype."