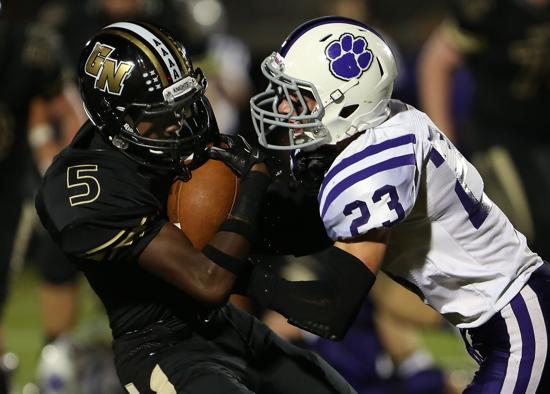 Hampshire's Trey Schramm (left) hadn’t intended to return, but decided to come back and play defensive back and wide receiver this season. | Joe Shuman/For Sun-Times Media

On the defensive side, coordinator Ben Whitehouse is using the same scheme employed under former coach Dan Cavanaugh, who retired after 25 years. On the offensive side, the Whip-Purs are trying to adjust to Brasile’s more modern spread-style offense after scrapping the winged-T.

“So our defensive kids don’t have to think a lot while on offense we’re still thinking a lot and progressively trying to make things look sharp,” Brasile said. “The defense is flying around making plays, which is kind of tough for me as the coordinator of the offense to watch. It’s kind of embarrassing, but we’ll get there.”

“He throws a nice ball and he’s highly intelligent, 13th in his class, and makes good decisions” said Brasile, a former assistant at Leyden and Woodstock.

Brasile has nine returning starters, but also a handful of first-time or former football players who are in the fold for a final year or two of the sport.

Track athlete Devontae Johnson is one, and he’ll be splitting time with returning senior Mason Fleury, a power runner.

“The two of them complement each other well,” Brasile said.

“The good thing about our offense is that it can change to fit your personnel,” Brasile said. “If you’re better suited to running the ball it can accommodate that, or it can change up to emphasize the pass.”

With 50 players on the roster, the Whips can play platoon football, and will — except for Fleury at safety, Schramm at corner and Johnson at linebacker.
Stephen Kirkwood, Pat Fleener, Nick Seliga and either Mull or Bulow alternating will comprise the D-line, with Johnson, Mike Palazzolo, Nick Seliga and Vinny Mounivong at linebacker.

“There’s quite a bit of speed up front,” Brasile said. “They really get after it, they’re high-motor kids.”

The defensive backfield is comprised of Schramm, junior Logan Fleury and senior Nico Bennett at corner, with Mason Fleury and junior Mike Kruse as safeties.

Brasile’s years at Woodstock make him familiar with the Fox Valley Fox, and he expects Crystal Lake Central and Grayslake North to be a challenge.

“A lot of people still look at Hampshire and say it’s a small farming community, which I think helps us come in with a chip on our shoulders,” Brasile said.