Signs point to No. 16 Maine South having the potential to pile up points in bunches once again this season. 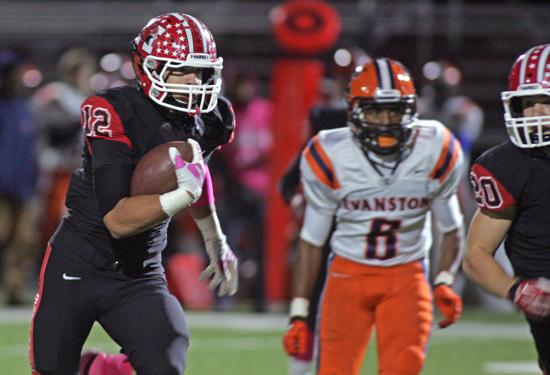 The tone for the 2014 season was set months ago for Maine South.

"After our last game against Loyola last year [a 35-0 Class 8A quarterfinal loss], we brought all the underclassmen in the locker room," senior Vinny Labus said. "We told them that we mean business this year."

And business as usual for the Hawks means a productive offense leading the way for a team that has dominated the Central Suburban League South to the tune of 65 straight conference wins and counting.

Signs point to Maine South having the potential to pile up points in bunches once again. Junior quarterback Brian Collis, who won the starting job last season, is back and has a few other skill players returning to make his job easier.

"Collis is really looking good," said Labus, who will start at wide receiver and linebacker. "He put in so much work in the summer."

"Brian, we're going to treat him like a senior since he had pretty much a full year under his belt," Maine South coach David Inserra said. "He wants to learn, he wants to be coached, he wants to be pushed."

"He's a guy who not only gets open — once he catches the ball, he's special," Inserra said of Bazarek.

"I think this year, we definitely have to throw the ball," the coach added. "That's where our strengths lie. Let's use our strength."

But the Hawks won't be one-dimensional.

Senior Justin Fahey was an all-conference running back in 2013, gaining 848 yards and scoring six touchdowns.

Senior right guard Tyler Bolger, a 6-foot, 255-pounder, is the only starting offensive lineman back to protect Collis and open running lanes for Fahey.

"The line is coming along," Inserra said. "They're inexperienced, but they do have size. I think their strength is the pass protection."

Labus, Fahey and Bazarek all will start on defense as well, the latter two at safety and cornerback, respectively.

"I think the kids have a good grasp of what we're doing," Inserra said.

That will get a test the first two weeks of the season, when the Hawks host Montini and play at Wheaton Warrenville South.