After a second-place finish in Class 2A last season, Burlington Central opened up play this year with a 320, two strokes behind first-pace finisher DeKalb, at the Larkin Invitational on Wednesday. 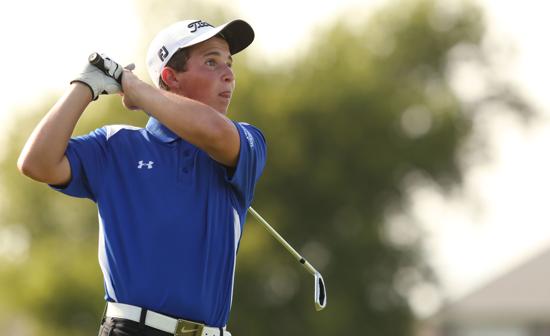 Burlington Central boys golf coach Deb Twenhafel is hopeful her team will be able to come close to last year’s second-place finish in Class 2A.

Her Rockets didn't disappoint in their season opener at the Larkin Invitational at the Golf Club of Illinois in Algonquin on Wednesday.

While DeKalb rolled in to take the team title and medalist honors, the Rockets landed right behind. Central shot a 320, two strokes behind the Barbs, and senior Andrew Sherman shot a 77, one stroke shy of DeKalb’s Austin Freeman.

Austin Niesel and Joe Sherman each shot a 79 for Central.

“They did well,” Twenhafel said. “They don’t think they did well, but I think they did for their first tournament. This is not a really easy course. A few teams really struggled. I didn’t expect those scores to be up there today, to be honest with you. They always say they’re not playing well and they always come back with a good score. I’m very pleased with three scores in the 70s, that was awesome for today.”

Andrew Sherman had the highlight of the day for the Rockets. On his 12th hole, the par-four 18th, Sherman used a hybrid to put himself 125 yards from the pin. With a pitching wedge, he spun a shot off the slope and holed it.

“It was a nice little pick-me-up,” Sherman said.

As for the team, he was happy to see how they shot in their debut.

“We were happy with the result,” Sherman said. “We definitely left a couple strokes out there. We just like to have a good time. The whole team is lighthearted and we go out there and have fun.”

South Elgin continued its solid start to the season with a 327. A day after earning medalist honors with a 74, Ethan Hildebrand had another solid day, leading the Storm with a 78.

“That’s outstanding,” first-year South Elgin coach Gordon Brown said. “Top to bottom, you can’t ask for anything better, on a course that most of them have never played. It was a good start, we all agree on that.”

Geneva placed fourth with a 330 behind a 79 from Andrew Abel. St. Edward shot a 340 behind an 80 from Aaron Worf. An 80 from Andrew Nelson paced Batavia’s 341. The Bulldogs took sixth by virtue of a fifth-card playoff with Lake Park, who also shot a 341.