Providence wide receivers Miles Boykin and Nate Vejvoda might prove to be unstoppable in 2014. 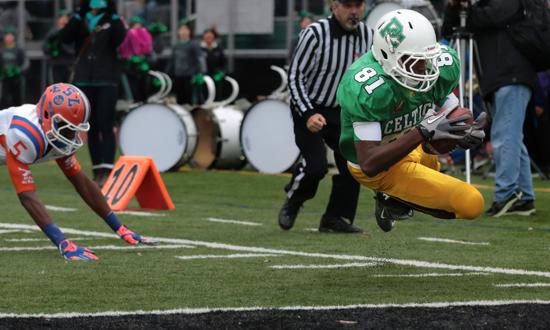 The task of defending one 6-foot-4, Division I caliber receiver can be a difficult assignment for most teams.

That scenario might prove to be unstoppable. At least that's what Providence, the SouthtownStar's No. 7 preseason pick, hopes when it unleashes seasoned seniors' Miles Boykin and Nate Vejvoda on opponents in 2014.

"I think we should be able to score on any team,"  Vejvoda said. "I don't see anyone stopping us."

Vejvoda, along with Boykin, provides Providence with a pair of imposing 6-4 targets. Vejvoda has committed to Iowa, Boykin to Notre Dame. The tandem combined to make 75 catches for nearly 1,100 yards last season.

Beyond their physical skills, Boykin and Vejvoda possess the ability to get open and produce the big play. It's unlikely there's a more dangerous receiving combination in the Southland, arguably the state.

"Our offense will be explosive," Providence coach Mark Coglianese said. "Both Miles and Nate are big targets."

So who has the luxury of getting them the ball?

Quarterback Justin Hunniford returns behind center. The 5-9, 180-pound senior is coming off a season in which he passed for more than 1,800 yards and 20 touchdowns — 13 of which landed in the arms of Boykin and three to Vejvoda.

With each a year older, wiser and stronger, it should lead to many more touchdown celebrations in '14.

"We're all better than we were last year," Vejvoda said. "But we have to still go out there and do it. We're very focused."

There are a couple of question marks surrounding the Celtics, who finished 7-5 and advanced to the Class 6A quarterfinals last season: for one, who takes over the primary running back responsibilities from Dominic Lagone, who accounted for more than 1,700 yards and 22 TDs?

There's major buzz surrounding the potential of Warfield, who is making quite an impression during practice.

"Richie is going to open some eyes," Vejvoda said. "He's a workhorse."

The other concern is the lack of experience on both sides of the line. All five O-linemen graduated and just one returns on defense, senior Jake Rost (6-2, 215).

There's plenty of promise, however, on the defensive side. Mike Madej will anchor the secondary. Ditto for senior Jimmy Sharkey (5-10, 190) at linebacker.

Coglianese is confident that senior Luis Vasquez (6-1, 185) will make an impact on the defensive line, seniors Emmet Trost and Brendan O'Hara will step in at linebacker and junior Zach Pych will develop into a playmaker in the secondary.

"The offensive line is getting better," Vejvoda said. "The defense knows it has a tradition to keep alive. It's all coming together."

It better. The Celtics schedule is a meat-grinder, beginning with an Aug. 29 season-opener against Joliet Catholic. Of course there's the perennial slate of Catholic Blue foes and crossover contests against Minooka, Marmion and Bishop McNamara.

"I don't think the schedule is as tough as last year but it's still up there," Vejvoda  said. "There's  always pressure in the Blue. You can't slack off. You have to bring it every game.

"We have to stay focused and not get ahead of ourselves. The last couple of years we haven't lived up to the tradition of Providence, but we plan on bringing it back."

Vejvoda is willing to do everything in his power to assure that happens.

"I just want to catch whatever comes my way and help my teammates out with a block," he said. "Whatever it takes."