Bryson Oliver will be go-to guy for Metea Valley offense

Senior running back Bryson Oliver, Metea Valley's starting point guard on the basketball team last winter, appears he’ll be the key man in the backfield for the Mustangs this fall. 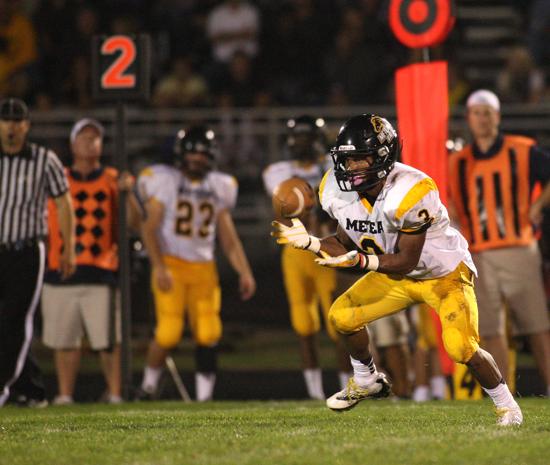 “I’m looking for a lot of big holes for me to get through,” Metea Valley running back Bryson Oliver said of the upcoming season. | Mike Mantucca/For Sun-Times Media

He’s done plenty of that during the winter as the starting point guard on the basketball team. Now, it appears he’ll be the key man in the backfield for Metea Valley this fall.

“I’m ready,” he said. “We’ve got most of our line back from last year, so we’ve got experience. I’m looking for a lot of big holes for me to get through.”

Experience isn’t a word that’s thrown around much at Metea Valley. The program is only entering its fifth season, but the offensive line is definitely experienced.

The line will feature a pair of third-year starters in center Mark Fitzgerald and left tackle Brett Boddy. In addition, right guard Kyle Grask is back, along with right tackle Mark Konkle. Together, those four weigh just under 1,000 pounds.

Senior Kyle Mooney takes over for Blaise Bell at quarterback. He’ll certainly look to get the ball into Oliver’s hands often, either via the rush or pass.

While Oliver’s number should be called often, senior wide receiver Nick Dodson (42 catches, 657 yards, 15.6 avg., 11 TDs) is certain to draw a lot of
attention as well, especially after a strong campaign a season ago. Fellow senior Kris King and tight end Erin Morgan also are options.

“I think we’ve got some great athletes at the wide receiver positions and Kyle’s stepped up a lot,” Oliver said. “We beat Montini in the summer. Kyle could’ve played last year, but with Blaise back there he had to wait. He’s a smart quarterback and we have a lot of options so we should be pretty good.”

Even if the Mustangs prove capable of scoring a lot of points, they’ll need to improve defensively, especially against the perennial powers of the Upstate Eight Valley. They allowed 262 points (52.4 avg.) in their five losses last year.

“We had a lot of juniors start on that side last year so we’ll have a lot of returning people,” Mustangs coach Ben Kleinhans said. “We’ve got a strong senior class looking to lead us to our first winning season and playoff berth.”

Fitzgerald and Matt Hartegan will need to step up on the defensive line, as will linebackers Ben Belskis, Logan Cotler and Mitch Waller and free safety Tommy Ensminger. All six players are seniors.

Perhaps this will be Metea Valley’s year.