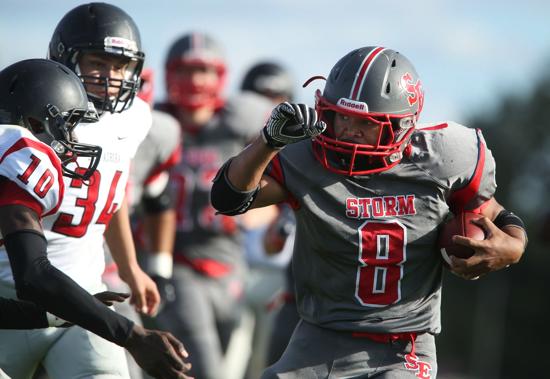 South Elgin’s Kyle Ware (8) will line up at running back as part of a potent offense and will also play linebacker. | John Konstantaras/For Sun-Times Media

Second-year South Elgin football coach Pat Pistorio looks at the third-place state trophy won in baseball last spring and the basketball team’s run to sectional finals and wonders aloud, “why not us?”

“There’s a lot of energy running through this school,” he said. “We think it’s our time.”

It’s more than energy. Long considered an explosive, finesse football team, the Storm underwent a serious weight room program that Pistorio believes will make them more capable of playing a physical style on defense and offense.

“We had 67 kids we put through a combine last year and 52 could not bench 185 or squat 225 — this year we tested 91 kids and 72 did that,” Pistorio said. “It started with our offensive line but our whole team has made the real commitment.”

“We’ve been talking a lot more about being physical,” Pistorio said of his defense.

There’s little doubt the offensive line is more equipped for this. The young line led the weight room charge.

The only uncertain line spot is center, where seniors Al Malfitano, Paul Neumann and Hapel are battling.

Running behind them are junior state 100-meter qualifier Shawn Griffin, and Ware, who is squatting 405 pounds and runs a 4.7 40.

“The idea is to put together a good running game, keep the defense on the sidelines and take off the pressure,” Pistorio said.

Senior quarterback Hayden Nelson is coming off a big summer in 7-on-7 and will throw to seniors Nick Menken and juniors Jeff and Andrew Kamienski and junior Derek Kumerow, son of former NFL player Eric Kumerow, which makes the passing game no less a threat than in the past. Menken made 38 catches for 723 yards and 11 TDs last year.

“I think we’ve got awesome speed,” Pistorio said. “We’re having a lot more success throwing to our backs than in the past, so that’s opening a lot up.

“Overall, I’d have to say we’re excited offensively. As long as everyone stays in their role and within the system, we can be potent in our production.”