Youth and inexperience is not enough to worry No. 15 Lake Zurich, which can look back at its impressive recent history to boost confidence. 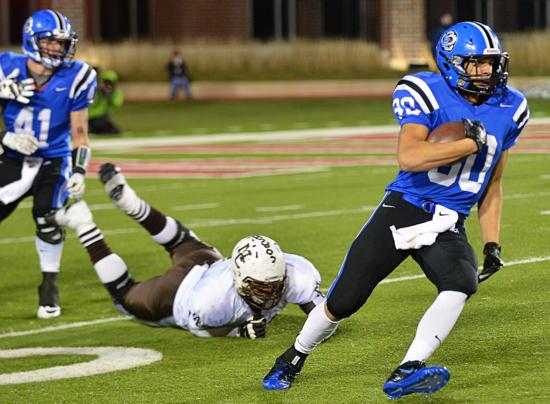 Lake Zurich's Ben Klett runs for a first down against Mount Carmel during the 2013 IHSA Class 7A championship game. | Patrick Gleason/For Sun-Times Media

Experience is in short supply at Lake Zurich this fall, but so is anxiety.

"Every year we lose guys, but we have to adapt," senior offensive lineman Zach Wallace said. "It's nothing new for Lake Zurich."

Neither is a positive outlook, something based on an enviable history. The Bears have been to the Class 7A semifinals or beyond seven times in the past eight seasons, winning a state title in 2007 and finishing second three more times.

The formula for success has been pretty much the same: an effective running game with multiple backs and a quick, hard-nosed defense.

The pieces look to be in place for another productive season for the Bears, who are No. 15 in the Sun-Times Preseason Super 25.

"That's what our bread and butter is," Lake Zurich coach David Proffitt said, "being able to run the ball and control the ball — allow our defense not to be on the field so much."

Both veteran ball carriers are ready for expanded roles.

"We're looking for him to play defense, too, which is unusual for us, to have a two-way player," Proffitt said of Klett.

Of Lodico, the coach said: "He's bigger, he is stronger. He's looked good running the ball, he's also our starting punter and he has a heck of a leg. He could be a very big weapon."

Wallace, a 6-7, 245-pounder committed to Wyoming, is the only returning starter on the offensive line.

"A lot of these guys didn't get much playing time last year," Wallace said. "We're all showing some improvement. ... We're definitely having some good chemistry. Now we're getting the hang of things."

"Joey is a work in progress like a lot of the young kids," Proffitt said. "Every day he gets a little better."

"[With] Joey, I've seen so much improvement throughout the summer," Wallace said.

The only returning starters on defense are senior cornerback Trevor Staley (6-2,180) and senior outside linebacker Jordan Juarez (5-11, 175).

So the summer and preseason have been a time to sort out personnel and figure out what schemes will work best.

"We're progressing very well," Proffitt said. "I think we're right where we need to be, but there's so many holes we need to fill. You still don't know till you go against somebody [else]. We've looked good in practice at times and other times we've struggled."

The game plans will be simplified, at least until the newcomers get more game experience.

"The big thing, with inexperience, we won't be able to do as much as we have in the past," Proffitt said.

But one other thing hasn't changed.

"Their work ethic has been very good," Proffitt said. "No different from teams in the past."

If the results are similar too, the Bears will be happy.