St. Rita looks to return to its traditional power running attack as it readies for the 2014 campaign. 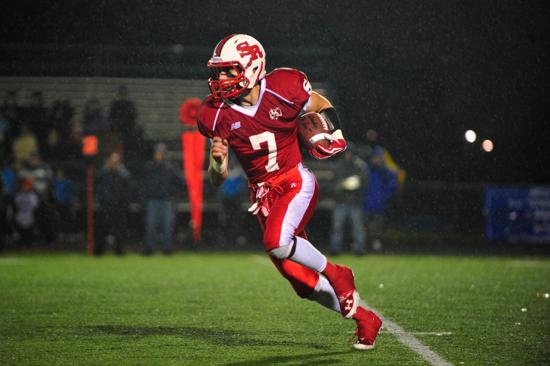 C.J. Weydeman will take over behind center for St. Rita in 2014.| Gary Middendorf/For Sun-Times Media

St. Rita's offense had a different look last season, for a good reason.
When you have one of the best dual-threat quarterbacks in the Midwest, you take advantage of his skills.

But Tommy Mister, who piled up more than 2,700 yards of total offense and accounted for 36 rushing and passing touchdowns, has moved on to Indiana. And the Mustangs are back to doing what they've been doing for years.

"I'm not going to look to our quarterback to rush for 200 yards [a game]," St. Rita coach Todd Kuska said. "We're going to leave that to our running backs."

Or as junior linebacker Matt Mitchell put it: "We're going to get back to the Catholic [League] Blue smash ball."

St. Rita, which is No. 14 in the Sun-Times Preseason Super 25, looks to have the personnel to do that with a big, agile offensive line and a pair of capable backs.

"They're a big group of dudes," Mitchell said. "I feel bad for the linebackers on other teams. I know after getting hit by them every day, I'm sore."

"Having Tyre back has been huge," Kuska said, and Mitchell agreed.

"Tyre, he's something else," Mitchell said. "Last year he was a phenomenal runner ... I think he's gotten five times better. ... We can rely on him to get those big yards we need."

Ditto for Zunica, Mitchell said: "He will get those hard yards and put his head down."

Taking over for Mister is senior quarterback C.J. Weydeman. His targets will include senior wide receiver Brandon Gaston (6-2, 185), who had a 56-yard touchdown catch in the Prep Bowl last season.

The Mustangs have an experienced defense with veterans at every position group. Seniors David Landstrom (6-5, 260), who had 38 tackles and four sacks a year ago, and Steve Abramowicz (5-11, 245) return on the line, while 6-0, 180 senior Marty Bechina (52 tackles, 4 interceptions, 4 tackles for loss) leads the secondary.

In between are returning linebackers Mitchell (88 tackles, 3 interceptions), 6-0, 205 senior Gerald Whitaker (45 tackles) and 6-1, 205 senior Tom Rehfeld, who had 16 tackles before an early-season injury.

"The guy who's really had an outstanding camp is Marty Bechina," Kuska said. "He's not going to make mental mistakes."

The defense would have been even better had speedy junior defensive back Dan Gleaves not been lost to season-ending ankle injury. "That really hurts our depth," Kuska said.

But the pieces are still there for the Mustangs to compete in the rugged Catholic Blue and make some noise in the Class 7A playoffs.

"We've seen these articles," Mitchell said. "People are saying we'll be good. We don't want our heads to get big. ...

"We're pretty technically sound. It's whether or not we show up on game day."