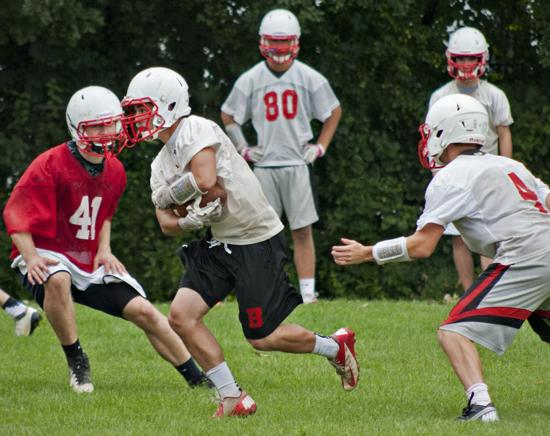 Benet running back Liam Masse takes a handoff from quarterback Patrick Ramatowski (4) as Vince Jablonski (41) moves in to defend during the Redwings' first practice of the season. | Jon Cunningham/For Sun-Times Media

Benet will look to feed off previous sophomore success to return to its winning ways this fall.

The Redwings are coming off an enigmatic season. After winning their first six games and climbing up the state rankings, they suddenly fell apart, losing their final four games while being outscored, 162-45.

It normally doesn’t take family to win, but this year it will for Brad Sznajder, and his younger brother, Jack. The younger Sznajder inherited the starting quarterback job when Jack Beneventi (Iowa) transferred to Fenwick over the summer.

“Jack was exposed to a high level of play with the sophomores and has done really well,” Benet coach Pat New said. “It’s really fun having the two Sznajders. I was kind of joking with them and told Brad that he can yell at Jack if doesn’t get a pass to him. I think it’ll be good for Jack to have his brother here, especially if he’s nervous early.”

Look for the Redwings to try to balance their attack by passing the ball. Slot receiver Myles McKernin saw some playing time last year, while wide receivers Karl Schmidt, Pat Ramatowski and Jack McDonnell have been impressive in practice.

Defensively, the Redwings will be significantly different personnel-wise, at least compared to last year’s senior-laden unit. That doesn’t necessarily mean that they’ll be weaker though.

“The last two sophomore teams went 9-0 so we’re used to winning,” senior linebacker Brian Runger said. “Obviously, we have a lot of holes to fill, but a lot will be filled with senior starters, and they’ve stepped up so far to help fill the void.”

Runger and Pat McCarthy appear to be two of the primary leaders of the defense, along with fellow seniors Jack Kelly and Mac Cooney, and junior Trent Kramer.

“I saw how the seniors were last year and how their hearts were broken that we didn’t go as far as we wanted to go,” Kramer said. “We’re going to just give it our all and make the best of it as we can. The guys are stepping up and looking good so far and hopefully we can win as many games as possible.”

The East Suburban Catholic Conference should be extremely competitive once again. The Redwings will only face two teams (Carmel and Marian Catholic) coming off losing seasons as seven of their opponents qualified for the post-season last October.