Mother McAuley lost only one starter from its 2013 Class 4A state title team and the returning champs are poised to give the program more success than ever. 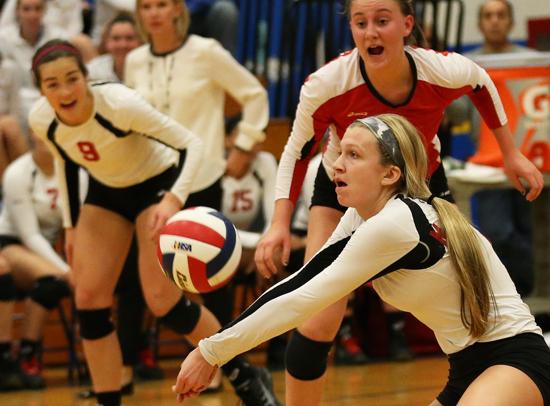 During the 2013 season, Mother McAuley’s players wore T-shirts that read, “Unfinished Business,” referencing their Class 4A state title bid in 2012 that came up just short.

When the season was over, the Mighty Macs had won 40 matches and ended the longest state championship drought in McAuley history.

“Continuing on the journey and the tradition of McAuley,” Mighty Macs senior Ryann DeJarld said. “We know what it’s like [winning a state title] and we want to do it again.

“We’ve been a young team since sophomore year when five of us were starting. Now that we are seniors we kind of have experience under our belts and we’re ready to go. It’ll be fun.”

The Macs have their sights set on more than a repeat state title.

“We also have a great shot at a national championship right now,” coach Jen DeJarld said. “We’ll see. The sky’s the limit with this team. The big factor is if we stay healthy throughout the season.”

Even by McAuley standards, the 2014 Mighty Macs are deeper than usual in experienced talent at the top of the roster.

The only starter who graduated was 2013 SouthtownStar Player of the Year Courtney Joyce. Otherwise, the Mighty Macs are a mirror image of their state title squad with:

Ryann DeJarld, who from the outside hitter position led the team in kills and aces and is committed to Notre Dame.

Senior middle blocker Kelsey Clark, who was second in kills and will attend George Washington.

Senior libero Carla Cahill, who led the team in digs.

The setting duties will fall to junior Jane DeJarld and senior Amber Casey.

The quest, especially for the six returning players who had significant roles on last year’s team, is far from finished.

“Last year was last year. This year is this year. We’re going to come out stronger and work harder. If we stay humble, grounded and focused, things will go our way.”