As anchors go, Plano coach Brad Kunz has a good one to turn to in fourth-year varsity player Junior Nunez. 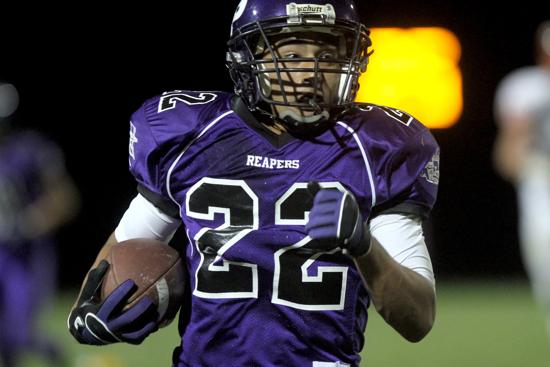 As anchors go, Plano coach Brad Kunz has a good one to turn to in fourth-year varsity player Junior Nunez.

“He’ll be a three-year starter for us and even started one game as a freshman,” the second-year coach said of the 6-foot, 260-pound senior who will lead both Reaper lines, at left tackle on offense and noseguard on defense.

“Junior has embraced the role of being a leader. I’m really impressed with his maturity. He will start at the nose on defense but we’ll be bouncing him around. We feel he’s one of the best in the area.”

This Reapers team will have an interesting blend as it pursues the program’s ninth playoff appearance in 10 years, building on the foundation laid by former coach Jim Green. Kunz made a seamless transition to head coach after three years in the program.

He led a veteran team to an Interstate Eight Conference Large Division title, second round of the Class 4A playoffs and 9-2 record.

“(Preseason) has been pretty hard because we’re so young,” Nunez said of this team, featuring three returnees who count as five returning starters, two on offense and three on defense.

“We’ve had to learn everything and I’ve tried to take on more of a teaching role. We’re young but we have speed and we’re good. I think we’ll know what we’re doing and handle the pressure. We’ll be fine.”

“We’re young but we still have 22 seniors,” Kunz said. “It’s just that a lot of them haven’t started. It’s made for a learning curve early. And when you play teams like Yorkville (in the season opener), it’s could look like an uphill climb.”

Plano took advantage of a revamped division that now includes Streator and allows open scheduling the first two weeks, to add 6A Yorkville the next two seasons.

“To continue to grow, we have to use these first two games to prepare us for better playoff opponents,” Kunz said.

Sophomores will play key roles in 2014, especially on offense, where Tyler Ward (6-0, 180) has won the starting quarterback job in a duel with senior Marco Martinez (5-10, 160), following the graduation of Collin Seyller.

Martinez, who will see time at wideout, will also see action at QB in a situational role, Kunz said.

Ward’s offensive line, could have three or four sophomores joining Nunez, who got stronger in the offseason and improved his maximum in three key lifts – bench press, squat and dead – to 310, 455 and 500, respectively, this past offseason.

He’s drawn a lot of interest from St. Francis University in Joliet as well as some small Division I schools.

“Three sophomores will probably start. I feel like they are ready and when sophomores are ready (to play varsity), you need to play ‘em,” Kunz said.

Daniel Schane (5-11, 190), a pleasant surprise last year who came to be known as “steady Eddie” amongst the coaches as a reserve tight end, also returns.

“I feel like we have quality and a large enough group to develop some good backups,” Kunz said. “I’m pretty confident in what our defense can do.”