WW South's new quarterback-receiver combo of Josh Prueter and Keishawn Watson are hoping to recreate some of the offensive magic the Tigers have enjoyed in recent memory. 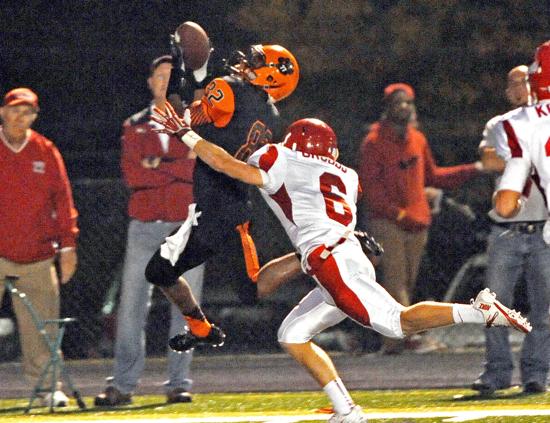 When he looks across the line in practice, Tommy Vitale sees echoes of Wheaton Warrenville South's past.

Now, the Tigers start Josh Prueter at quarterback and Keishawn Watson at wide receiver. Four years ago, it was Reilly O'Toole (on his way to a Sun-Times Player of the Year season) and Titus Davis.

The O'Toole-to-Davis connection worked pretty well that fall for the Tigers, who scored 40 or more points 11 times en route to a 14-0 run to the Class 7A title.

If Prueter and Watson can work similar magic, this could be a big season for WW South — the No. 13 team in the Sun-Times Preseason Super 25.

"Josh is very fast and very shifty," said Vitale, a senior linebacker. "He has the perfect tools for quarterback. He's got arm strength and speed."

So does Watson. The Western Michigan commit was the top pass catcher for last year's run-oriented club with 20 receptions for 477 yards and four touchdowns.

"Josh Prueter is a runner/thrower," Tigers coach Ron Muhitch said. "He'll be like [2013 quarterback] Ryan Graham. [And] he's the fastest kid on our team."

The Tigers also will be looking to keep defenses honest with a run game led by senior Michael Campos (5-6, 175), whose since-graduated brother Isaiah was their leading rusher last season. "Mike Campos is one of the most athletic people I've ever seen," Vitale said.

Another option at running back is senior Jevon McCorkle (5-8, 180), a move-in from North Carolina.

"We've got a really, really good set of skill guys, though we're not very big, height-wise, at the skill positions," Muhitch said.

"What I like about our surrounding cast, it's going to be a really aggressive defense," Muhitch said.

Seniors Jake Kyllonen and Erik Lipinski are among the players to watch in the secondary.

The defense has been frustrating Muhitch in the preseason, but in a good way: "It's been hard for us in practice to get the run game going."

But this senior group, defense and offense, has been good for a while. It didn't lose a DuPage Valley Conference game as freshmen or sophomores, and a loss to Glenbard West's sophomores was its only defeat overall in that stretch.

"They've been exceptionally good at just playing and playing hard," Muhitch said. "They're a very athletic group of kids.

"We'll be as good as anybody we play."

And perhaps as good as their predecessors.