After a disappointing playoff exit last year for Lincoln-Way East, quarterback Mike Weller and running back Alex Kraft are hoping the Griffins will leave their mark all over the SouthWest Suburban Blue and beyond. 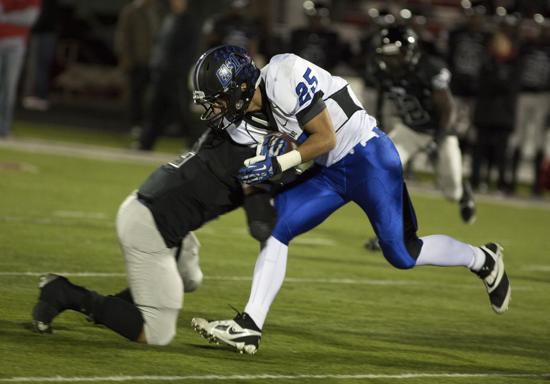 Rob Zvonar has had a lot of victories as Lincoln-Way East's coach, but none of the moral variety.

That includes last season, when the Griffins battled through an unusually large number of injuries en route to a 9-3 finish and a Class 7A semifinal berth.

"We were right there at the end of the game with two of the best teams in the state, Bolingbrook and H-F [Homewood-Flossmoor]," Zvonar said. "You need to stop one drive [against Edwardsville] to get to the semifinals.

"Through the adversity, there were some silver linings. [But] that's loser talk on my part. We're proud of the kids always, they worked their tails off. But losing three games is not what we pride ourselves on here."

So the goal for the Griffins, who are No. 12 in the Sun-Times Preseason Super 25, is to challenge Bolingbrook and H-F again in the SouthWest Suburban Blue and make some noise in the 7A playoffs.

There are some good pieces in place for East, including senior quarterback Mike Weller and senior running back Alex Kraft.

Weller took over the starting job when Jordan Wirtz moved to running back last fall. The 6-1, 180-pounder completed 50 percent of his passes for 689 yards — 211 of them against Edwardsville in the 7A quarterfinals — and five touchdowns.

"He really stepped it up at the end of last year," senior offensive lineman Tim Vyhnanek said of Weller.

Kraft ran for 351 yards (5.8 per carry) and five touchdowns before he fell victim to the Griffins' injury bug.

"When they're in there, they give us a dimension of speed and big playmaking ability," Zvonar said of Weller and Kraft.

"He's the strongest player in the history of the program," Zvonar said of Vyhnanek. "Tim's a once-in-a-lifetime kid to be around."

On defense, the Griffins will be led by senior linebacker Luke Epich (6-1, 215). "He has a chance to be one of the top linebackers in the state," Zvonar said.

The hope in Frankfort is that it adds up to another big season for a program that's had plenty of them. The Griffins are the only team in state history never to have missed the playoffs, reaching the postseason every year since going varsity in 2001 and winning the 8A title in 2005.

"We have seen these kids walk with great humility, but also walk with confidence," Zvonar said. "I think we'll battle."