Mother McAuley coach Jen DeJarld and daughter Ryann were able to share a moment last fall that few parents and their children are able to experience. 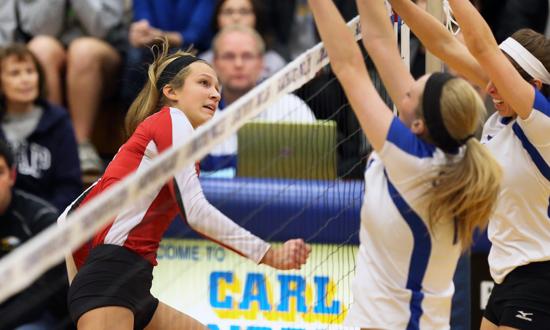 Mother McAuley coach Jen DeJarld and daughter Ryann were able to share a moment last fall that few parents and their children are able to experience.

“To be downstate with Ryann and watching her accomplish the goals she set for herself is something that every parent dreams for their child,” DeJarld said.

But it wasn’t the first time the DeJarlds celebrated a McAuley state championship.

The elder DeJarld has been coaching at her alma mater for more than 20 years. Her daughters, Ryann, a senior outside hitter, and varsity newcomer Jane, a junior setter, have lived and breathed red, white and gold since they were old enough to walk.

“Ryann was born on September 25, and a couple of days later I strapped her on to me for the Nike Challenge,” said DeJarld, who was an assistant to Nancy Pedersen before taking over the program 10 years ago.

“When I say my daughters grew up in the gym, they really grew up in the gym. My girls have been part of a lot of state championships during my tenure here. They used to come to the gym and make posters for their favorite players.”

Surprisingly, although McAuley volleyball created an indelible bond between sisters Ryann and Jane, prior to this year they had never been teammates at any level.

“Jane and I have been going to all the McAuley games since we were toddlers, getting to know all the players,” Ryann said. “They were our babysitters. We would come to all the practices. It was just the most exciting thing.

“Jane and I have been pepper partners since we were so young. We’ve always been playing together, but to be able to play on the same team is really special. It’s something we grew up wanting so badly. Winning (another state title) this year would be really special.”

Understandably, DeJarld said that coaching her daughters has its hardships. She might be a little more demanding of them than she is with other players, and there are times when one of her daughters might say something that she wishes they hadn’t.

Then there was the moment they all shared in 2006 following a stunning loss to Hinsdale South in the supersectional.

“Jane and Ryann, they might have been in third and fourth grade, came up and were just crying and screaming at me on the court saying ‘Mom, didn’t they know this was for the championship to go downstate?’” DeJarld said. “’Didn’t you tell them that?’

“It’s still one of the toughest losses I’ve ever experienced as a coach, and I will never forget how sad and angry my daughters were. They really weren’t mad at the team, they were just so sad for the girls because they loved them. They were more angry with me.

“That was a memory I’ll never forget.”

And one few expect the DeJarlds to relive this season.