Some of the area's top defenders are starting to watch their offers pile up, including DePaul Prep lineman Raequan Williams and Evanston’s Naquan Jones. 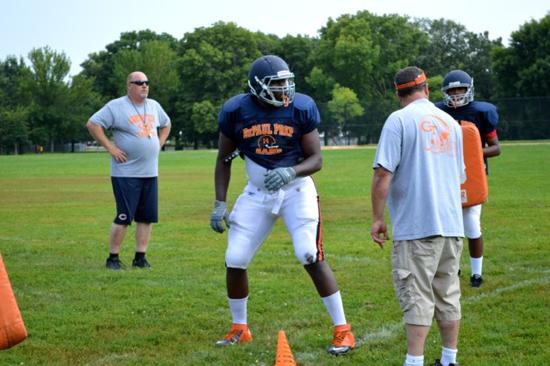 DePaul Prep defensive lineman Raequan Williams, a three-star recruit according to Scout.com, has offers from all over the country. The 6-5, 280-pounder has become a force to be reckoned with.

“The thing with him is he hasn’t even scratched the surface,” coach Bill Jeske said. “He is so raw, and he has everything in front of him. He is a smart kid and he is going to go somewhere with a regimented program, he is going to be a college graduate and be a heck of a player.”

Williams will make his decision sometime this fall as his senior season concludes.

“Everything is good, it is going very well. I am just ready to play the season and take a couple official visits and I will commit by the end of the season,” Williams said.

Williams has added recent offers from Kentucky and Ole Miss. He plans to officially visit Iowa, Arizona State and Missouri as well as two others yet to be determined.

“I just want to go and see a game and the atmosphere, I haven’t set any dates yet but I know I am going to visit those three schools for sure.”

Powe, a 6-2, 185-pound emerging senior, has an additional offer from North Dakota.

“My first offer was from the University of North Dakota and they saw me at the Pat Fitzgerald Northwestern Football showcase,” Powe said. “Getting the offer after camp was one of the happiest moments of my life because all the hard work finally started to pay off.”

“I like that Dayton is closer to some of my family. I have family in Ohio, and I like that I have former Hinsdale Central teammate Jack Adams there,” Nevotne said.

Evanston’s Naquan Jones, another top junior defensive lineman, is starting to plan school visits after getting offers from Illinois and Iowa during camp season.

“I would love to get down to Iowa, Notre Dame and Ohio State to visit,” Jones said. “Well I would really like to visit all the schools that are showing interest before the school year ends.”

The 6-4, 265-pound prospect is excited about the recruiting process ahead of him, and of course, the upcoming season.

“The best thing about recruiting is just all the love the coaches show me,” Jones said. “They make me feel welcomed and they make it comfortable for me. I also like that my teammates and coaches hold me to a higher standard because of the recruiting.”