The real litmus test for Elgin in its attempt to end a 12-game losing streak and start the climb back to Upstate Eight River respectability will be whether the offensive line and defense can stand up to the wear and tear in a physical conference. 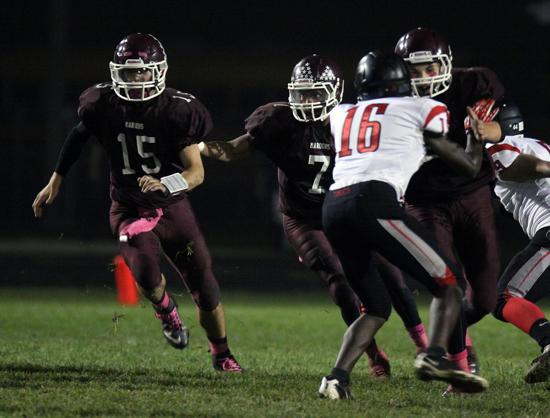 Elgin's playmakers proved themselves over the summer by displaying quickness in 7-on-7s, but playing in shorts and helmets only says so much.

The real litmus test for the Maroons in their attempt to end a 12-game losing streak and start the climb back to Upstate Eight River respectability will be whether the offensive line and defense can stand up to the wear and tear in a physical conference.

"All summer guys have been telling me we're playing aggressive, but they wonder if up front we have what it takes to play," coach Kyle Rohde said.  "It's a decent group. We're still trying to shake them around and figure out who plays best where."

Starting with the offensive line and on through the defensive line and secondary, Rohde thinks he has physical players. The real question might be whether they have enough of them.

Juniors David Draka, Fernando Vargas, and Maurice Griffith and seniors Alex Guerrero and Ariel Barraza can play both ways on the line, and there is enough depth that they may not have to do it all the time. Junior Sam Moscote is battling Barraza for starting center while Griffith is a guard who is getting competition for the nose tackle spot on defense from junior Angel Anecito.

Mike Behining, who moved from tight end to tackle this year, also plays linebacker on defense and is a physical presence. Sophomore fullback Austin Waarich is another physical player.

"Speed is great, but we do have to be stout up front," Rohde said of his defensive line. "We have to be able to stop the run. We have a state champion in our division (Batavia)."

Trae Sallis, Anthony Sharks and Dontrell Gaddy join Behining in the linebacker corps, attempting to supply both speed and some hard knocks. The secondary has a proven corner in Clay White, while senior Jordon Smith and junior Terrance Allen are competing for the other corner spot.

"If we can score like I  think we'll be able to on offense, we could surprise some people," Rohde said.

The quarterback battle has come down to Gaddy against Allen, both mobile with strong arms. They'll be throwing to Smith, a third-year varsity player, or 6-foot-6, 235-pound Elijah Bonds, who also plays defensive end. Desmond Douglas and Dean Anderson fit in as fast, athletic receivers. Anderson is a senior who didn't play last year.

The Maroons are finding the offensive and defensive schemes more natural in their second year under Rohde.

"We're improved, but I'm not predicting we'll be 8-1 or win state," Rohde said. "Definitely, we can be competitive week-in and week-out, though, when we couldn't always last year.

"I feel like we have a chance to do some things."