After a failed bid for the program's fourth consecutive Class 5A title, Montini appears more motivated than ever. And with talented players like Indiana recruit Leon Thornton III, the Broncos have good reason to be. 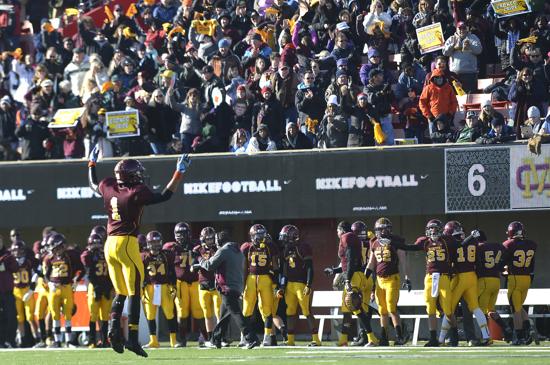 Most football teams would count finishing second in state as a successful season.

At Montini, it was a letdown.

The Broncos’ run of four consecutive Class 5A championships ended with a 38-28 loss to Sacred Heart-Griffin last season. They turned that disappointment into fuel for 2014.

“It was motivating for us,” senior quarterback Chuck Norgle said. “It got us in the weight room, it got us working hard so we can get back to king of the hill.

If that happens, it’ll be in 5A again. The Broncos — No. 11 in the Sun-Times Preseason Super 25 — were set to move up to Class 6A because of the IHSA’s new “success factor.” But the organization switched course and decided not to implement the change this year.

Any playoff bracket is fine with 36-year coach Chris Andriano and his players.

“We don’t really concern the coaching staff with all of that,” Andriano said. “We look at the challenges, what does it mean for our team? Just tell us when and where.”

This could be a pretty good squad regardless. As usual, the Broncos will look to air it out on offense.

After backing up Alex Wills last season, Norgle is ready to step into the starting job. “He’s very smart, does a great job with our offense, is good with reading defenses,” Andriano said. “He’s not a dual-threat guy, he’s a pocket guy. But he throws a real nice ball.”

And Norgle has Leon Thornton III (6-2, 190), a senior who’s ranked 62nd among the nation’s wide receivers by Rivals.com. The Indiana recruit caught 59 passes for 1,032 yards and 13 touchdowns last season.

The Broncos gave sophomore running back Prince Walker a little taste of varsity action last season, when he ran 32 times for 435 yards and five touchdowns. Expect a steady diet of Walker (5-10, 175) this season.

“I think we have a very solid offensive front,” Andriano said. “Depth is an issue.”

On defense, the Broncos must replace Sun-Times All-Area picks Dylan Thompson (Ohio State) and Nile Sykes (Indiana), along with Mike Maduko, who is a preferred walk-on at Ohio State.

“The guys who were waiting in line, they’re hungry, they have good attitudes, they work hard,” Andriano said. “You can win with those kind of guys.”