Preview: Fenwick's Olivia Ryan can make it 4-for-4 at state meet 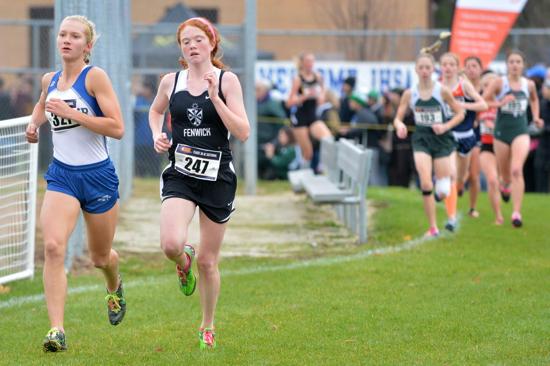 Fenwick senior Olivia Ryan gets overwhelmed when thinking about all she’s achieved as a long distance runner while at the Oak Park school.

Ryan, who hails from Western Springs, has been all-state (top 25) at the state cross country meet each of her three years. In track, she’s earned five all-state (top nine) awards.

“It’s more than I ever could have expected when I started high school,” Ryan said. “I didn’t even know much about running before high school. But I’ve had great coaches and amazing teammates, who have been so supportive of me. It’s just been amazing.”

“In terms of awards she’s one of the most decorated runners in school history,” Friars’ girls cross country coach Mickey Collins said. “I feel like Olivia is paving the way for the next generation of runners.”

Ryan was 14th at the Class 2A cross country meet as a freshman in a time of 17 minutes, 46 seconds. She made a huge improvement and the next year took fifth in 16:43 at the Class 3A meet as a sophomore. As a junior, Ryan collected her third all-state honor by finishing 22nd at the Class 3A race in 17:29.

While many girls distance runners peak as freshmen or a sophomores, Collins said that isn’t the case with Ryan.

“She had a great season last year; she just had one bad day in November,” Collins said. “I know she’s not going to let a bad race get to her.”

Ryan is excited for her senior season and can see a difference from a year ago.

“It’s all about training and I think I’m definitely better right now compared to this time last year,” Ryan said. “I focused more on building my base. I’m doing speed work and tempo pacing.”

While she once again hopes to earn all-state honors, Ryan also is aiming to return to the top 10 or top five. Collins believes the senior can achieve that goal.

“My expectation for her is that she can definitely get back in the top five,” Collins said. “She’s been very good in the summer and I think she’s ready for her senior campaign.”

As a senior, Ryan is taking a bigger leadership role after quietly trying to show the way in years’ past.

“She’s our fastest runner but she’s so humble about it,” said junior Ciara Hopkinson. “My freshman year I didn’t know she was this amazing runner until I found out she was all-state as a freshman. This year she’s been more vocal and is always encouraging everyone during our workouts. We all try to stay pretty close to her and she always helps us if we have a question or need advice.”

The topic that gets Ryan excited is qualifying the entire team for Peoria, something that hasn’t happened since her freshman year, when they took fifth in Class 2A.

“Last year we were just off by 14 points [at sectionals], so I definitely want us to make it this year,” Ryan said. “It would be really nice for all of us to get down there.”

She broke onto the high school scene last year as a freshman by finishing fifth in the Class 3A state meet with a time of 17 minutes, 7 seconds.

Haff is coming off a phenomenal freshman season, when she took second at the 3A state meet in 16:45.

After taking 59th in 19:03 at the 2A meet, the sophomore looks to lead a more experienced Nazareth team.

LEADERS OF THEIR PACK