Last season, a gifted yet inexperienced Richards stole the show in the Class 6A playoffs before eventually bowing out in the state final. This year, with seniors Spencer Tears and Hasan Muhammad-Rogers at center stage, the Bulldogs are ready for prime time. 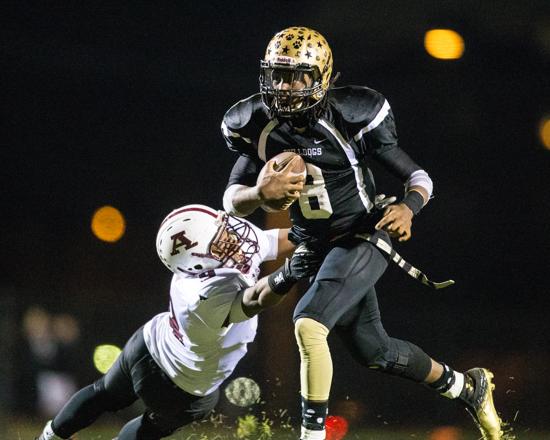 Senior Hasan Muhammad-Rogers will return as Richards quarterback despite sustaining a gunshot wound to the stomach in May. | Jim Boyce/For Sun-Times Media

The prevailing wisdom last fall about Richards was that the Bulldogs, with their deep and talented junior class, might be a year away from doing something special.

Then they rolled all the way to state, going 12-2 and reaching the Class 6A final where they fell 34-14 to Batavia.

Now those juniors are seniors and the Bulldogs are in the spotlight. That’s fine with senior receiver Spencer Tears.

“We’re ready, we’re taking it head-on,” said Tears, a three-star prospect who has scholarship offers from Nebraska, Louisville and Indiana among others. “We like the challenge, we like the attention and we feel like we’re a better team than last year.”

These Bulldogs — No. 10 in the Sun-Times Preseason Super 25 — will look a lot like last year’s version, at least at the skill positions.

Leading receiver Tacari Carpenter graduated, but everyone else is back. It starts with senior Hasan Muhammad-Rogers, one of the state’s premier quarterbacks.

Muhammad-Rogers passed for 2,298 yards and 28 touchdowns last year and ran for 432 yards and 10 scores. He survived a scare in late May when he was shot in the stomach. He was back on the field barely three weeks later for the Richards 7-on-7 passing tournament.

“All I can say is he’s blessed,” Tears said. “Anyone who can come back from an incident like that and come back full strength and play, it’s nothing but God. He’s blessed.”

“The good thing is they know they can get the ball at any time,” Richards coach Tony Sheehan said. “Even if you’re on the back side, you’re not going to relax on your route because [Muhammad-Rogers] might throw it to you.”

“They feel like they can lock down on one receiver, we’ve got another threat on the opposite side,” Tears said.

Opponents will no doubt game-plan to stop the pass. But the Bulldogs also have a pair of capable backs to provide some balance. Romeo Johnson ran for 509 yards (6.7 a carry) and nine touchdowns, while Romantay Hill added 375 yards (8.7 per carry) and three scores.

There is less experience on the offensive line, though seniors Josh Hettiger (6-3, 225) and Joe Korpitz (6-2, 245) do return. “Some young guys — they’re getting better every day and working through things,” Sheehan said.

“We feel pretty good about our D-line,” Sheehan said. “Our young linebackers have started to come through. We’re seeing a big change.”

But if progress has been made, Sheehan and his assistants keep pushing for more. “We harp on them, ‘Last year’s last year, what have you done for me lately?’” Sheehan said. “That’s a little thing that stings as well. We remind them we got [to state] and we didn’t even win our conference. ...

“They didn’t finish the job.”

This year, that’s the goal.