Preview: Cheerleading is fun, but Lyons' Macy Tabachka has passion for golf

Lyons senior Macy Tabachka golfs for Lyons in the fall, then shifts gears and is joins cheerleading in winter. 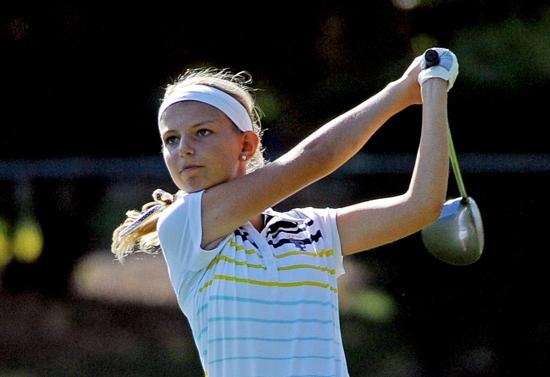 When it’s basketball season, Tabachka is a cheerleader for the Lyons boys basketball team. She started cheer while at LaGrange Highlands Middle School and continued in high school.

“I thought it would be fun to be part of a team [in high school],” Tabachka said.

Her main passion is golf. The Western Springs resident started playing golf with her father, Todd, as far back as she can remember, but began to take the game seriously while in eighth grade.

Over the summer, Tabachka played in 11 Illinois Junior Golf Association events, capped by an 83 to win a sectional title at Silver Lake’s North course in Orland Park. Tabachka placed 28th among 195 golfers in the player of the year standings for senior-level girls.

“It will be scoring by committee,” Anderson said. “If we win, we will win on depth. Before, it was on Ciara to beat the other team’s No. 1. I like our 1-2-3 punch. That will be our level of success.”

Tabachka had an inconsistent postseason last year, due in part to bad weather at state.

“There were pools of water, the wind was blowing and it felt like your ears were falling off,” Tabachka said.

Tabachka shot 85-93-178 to tie for 86th as Lyons’ sixth scorer. At the Homewood-Flossmoor Sectional, she shot an 86 a week after earning medalist honors at the Lemont Regional with a 76.

“At the regional, that was the best I ever shot. I had a good day, I guess,” Tabachka said. “At the sectional, I was on fire until I had a few rough holes.”

The junior from Elmhurst is the top returner for the Friars, but is getting pushed by freshman standout Stephanie Mroz, who won the IJGA junior girls Player of the Year Championship. Bell, who shot a 95 at the regional last year, finished 12th in the senior division.

The sophomore tied for 56th at state last year and finished seventh on the MAJGT circuit. She tied for fourth in the AJGA Midwest Juniors Players Championship on July 17 at Mistwood and took second July 10 at the MAJGT Purdue tournament.

Smith shot an 82 on the first day of last year’s state meet for the third-place Red Devils. Smith is the only returning senior for the Devils, who hope to win back-to-back state trophies for the first time. Hinsdale Central has made five consecutive trips downstate.

A sophomore from Oak Brook, Zeng is the area’s top returning state qualifier after placing 20th. Over the summer, she finished second in the MAGJT point standings, capping the tour with three consecutive runner-up finishes.