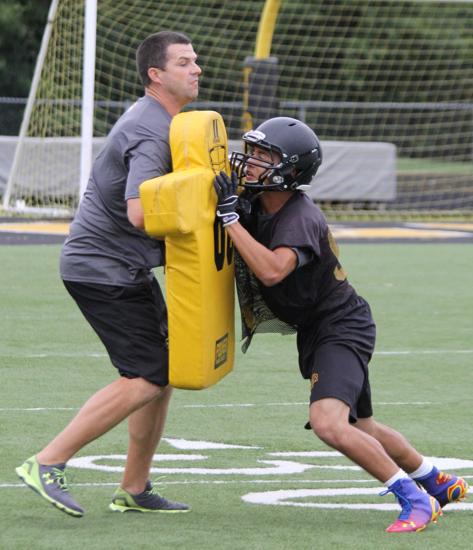 ELMWOOD PARK — Elmwood Park athletic director Doug Noyes didn’t have to look far for a new head football coach after Luis Arroyo stepped down and took a position as an assistant principal at Hoffman Estates.

“We have enough talented coaches that we didn’t need to go searching,” Noyes said. “We had a lot of good internal candidates that applied for the job.”

Noyes’ pick was John Freeman, who has been at Elmwood Park for nine years and knows the program inside and out.

“The two things that John brings right away are that he’s really committed and passionate to the Elmwood Park football program,” Noyes said. “He’s probably been the hardest working coach for the kids on offense. He did a great job developing the quarterback, Patrick McNulty, during our playoff season [in 2012]. He also has a great relationship with the kids and develops that one-on-one bond.”

Freeman, who was an assistant varsity coach last year, is thrilled to have the opportunity to grow a program that struggled to a 1-8 season last year after going 7-3 in 2012.

“I met with the team and told them my background and how I excited I was and what the expectations are,” Freeman said. “We wanted more toughness and we want to try and change the culture of the school. We want to have that commitment and the goal is to win, not just have fun.”

As high school coaches will tell you, in order to win in the regular season you need a productive offseason and Freeman likes what he’s seen.

“We had a great offseason program,” he said. “We do a lot of crossfit and the kids were very surprised the different ways we were teaching them explosion. Our numbers were much more solid than in other years and I think the kids spread the word that they were getting faster. The kids buying in is going to pay off for the program.”

“He’s taught us speed and how to lift the correct way,” Elmwood Park senior Yamill Matos said. “He’s a great coach and is really organized. He’s made me way better and I feel like we’re going to go far as a team.”

Matos, who is expected to be a major contributor and will see time at running back, wide receiver and outside linebacker, probably wouldn’t be playing football if it wasn’t for Freeman.

Matos didn’t plan to play sports in the fall of his freshman year, but that all changed when he landed in a class taught by Freeman.

“He was the reason why I came out to the football team,” Matos said. “He convinced me to come out. I wasn’t really that interested in football then, but now this is my second family.”

Freeman’s Tigers got their first taste of adversity thanks to recent construction at the school. The team wasn’t able to get in the building to their weight room for most of the summer.

So the team improvised and moved everything outside and into storage sheds, where they spent the summer lifting and getting stronger.

“Despite the disruptions John ran the best football camp I’ve ever seen at Elmwood Park,” Noyes said. “The kids and coaches were all involved.”

With no electricity or water, the coaches had other problems to work out.

“With all the news about kids overheating, there’s no way you could run a camp without water,” Freeman said. “So we would fill up huge Gatorade containers at my house before practices. It’s a lot more work than it sounds. We also had to go to the junior high school to print all the playbooks.

“The message is that there are no obstacles we can’t overcome. I thought it set the tone. If it’s important enough, find a way.”