The new-look Metro Suburban Conference is a unique mixture of public and private. 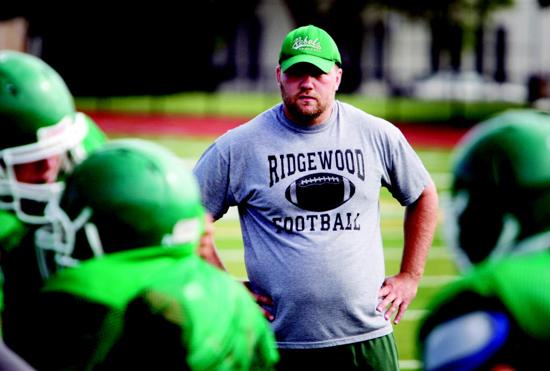 Under the new MSC alignment, Ridgewood coach Chris Zack will now have the second-largest school in the East Division, instead of one of the smallest in the conference. | File

Neither Elmwood Park, Ridgewood nor Guerin racked up a whole lot of wins last football season.

The three combined for just six victories while registering 21 losses.

But with a new season come new hopes. Fanning the embers of those dreams, all three squads are members of a new conference that has no dominant team.

Ridgewood (3-6 last year) and Elmwood Park (1-8) played in the five-team Metro Suburban last fall. Since then, the conference added seven football teams from the Suburban Christian and formed two divisions.

The Rebels and Tigers will play in the Metro Suburban East with Guerin (2-7), St. Edward (5-5), Walther Christian (2-7) and Chicago Christian (2-7). St. Edward was the only one of them to make the playoffs last year.

Division coaches all have reasons to believe a conference crown, along with a state playoff berth, is within reach.

“You’re always confident you have a shot to compete for conference, but this year it’s really balanced out and you feel like you really have a good shot,” Rebels coach Chris Zack said.

“Anytime you change a conference you’re excited with the chance for a fresh start,” he said. “Coming into this conference allows us to be more competitive. This is exciting for us.”

The Metro Suburban is the only football conference in the Chicago area that includes both public and private schools. The divisions were established by mixing private and public schools that had similar enrollments.

The two smallest public schools, Ridgewood (enrollment of 786) and Elmwood Park (946), were placed in the East Division with four of the smallest private schools. St. Edward is the largest, with a multiplied enrollment of 693, followed by Guerin (434), Chicago Christian (366) and Walther Christian (284). 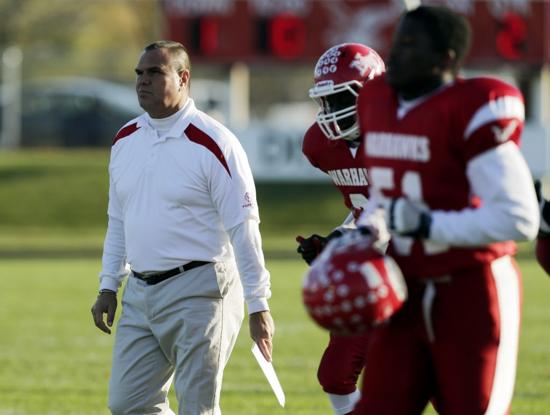 New Guerin football coach Glen Kozlowski likes that his Gators will now be in the same conference as nearby Elmwood Park and Ridgewood. | File

“I think it’s definitely a bonus for a school our size,” Tigers first-year coach John Freeman said. “We’ll have crossover games against some of the bigger schools and we want to play those games. We don’t want to run away from anyone but it will be nice to have conference games against schools that are our size, the size of teams we might play against in the playoffs.”

Ridgewood last qualified for the playoffs in 2002. It will still play former conference rivals Fenton and Glenbard South, who both advanced to the postseason a year ago, in crossover games. But St. Ed’s is the lone school in the East that is coming off a trip to the playoffs.

“After nine years of being the smallest team in the conference, we’re one of the biggest teams, enrollment wise,” Zack said. “It’s a shot in the arm knowing we have a chance to compete week in and week out and the kids are aware of that. I think that has them even more excited for the start of football than they usually are.”

Kozlowski, who played six seasons with the Chicago Bears as a wide receiver, is looking forward to forging rivalries with nearby Ridgewood and Elmwood Park.

“This is great for the players and the community,” he said. “Anytime you can play Ridgewood and Elmwood Park, it’s not a long drive and the kids will be excited. A lot of our players didn’t recognize the schools they were playing before. But they’ll all recognize Elmwood Park and Ridgewood and they’ll want to have neighborhood bragging rights.”

It all comes down to wins and the playoffs, and that’s why everyone is so excited.

“When we announced the new conference to the players it really set the tone for the summer,” Freeman said. “It’s the first year and there’s something special about that. There’s definitely a buzz and that’s a good thing.”

Even a historically successful program like St. Edward is looking forward to competing in a conference that has balanced enrollments.

“We’re not going to face a team with 75 guys on the roster like Montini, with two or three times as many kids,” Green Wave coach Mike Rolando said. “Instead of having a tough schedule with two or three state caliber schools on it, we might now have nine competitive games. It’s going to come down more to kids executing and playing football.”

St. Edward made the playoffs three of the last five years, but Rolando hopes the new conference will lend itself to more chances to go deeper in the playoffs.

“Maybe if you go into the playoffs with a very solid record, instead of limping in at 5-4, you’re going in with a little more confidence and the pairings are more favorable,” Rolando said.