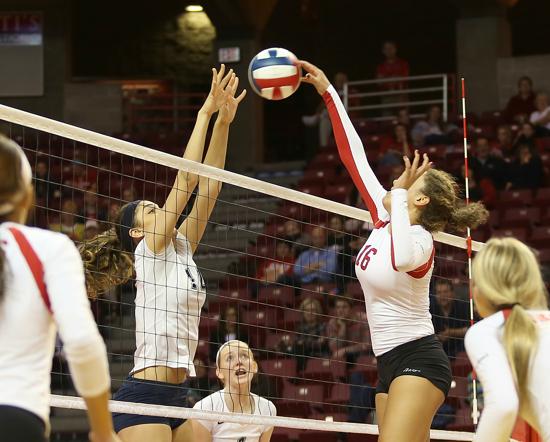 In this Nov. 15, 2013, photo, New Trier’s Sarah Shafiq (left) blocks a shot by Mother McAuley’s Kelsey Clark in the Class 4A state semifinals in Normal. Shafiq is the Trevians’ top returning player after the team finished third at state a year ago. | File

There aren’t many teams in the area that return as much talent as Evanston. The Wildkits bring back 10 players from last season, including seven seniors.

“I am very excited for our team. We should compete at a high level,” coach Pam MacPherson said. “It is a goal of ours to win the conference.”

Outside hitters Christine Covode and Ehize "Ze" Omoghibo will be the catalysts for the Wildkits. Both are seniors who their coach describes as “strong players.” Their talent and leadership, according to MacPherson, will help Evanston fight through tough situations to hopefully be one of the premier teams this season.

The Trevians finished third in the state last season and are expecting another lengthy playoff run this fall. That is despite losing nine key seniors from last season’s roster.

Coach Hannah Hsieh said that while replacing those players will be a challenge for her team, she is optimistic that younger players will step up and fill those roles. It helps that New Trier still has senior Sarah Shafiq, one of the state’s top middle blockers who has verbally committed to California. Shafiq, who stands 6-foot-5, will be the anchor of the team’s defense.

“We have a few girls that know the tradition and they’ll teach the new ones how we do things,” Hsieh said. “They’re a talented group, and I think we’ll be competitive in conference.”

The strength of the Trevians this season, at least early on, will be ball control. Hsieh said it would not be a surprise to see New Trier involved in several long points as the roster gets used to a lot of changes.

A strong senior group will be the key for the Titans in 2014. Coach Katie Hoover said the team will rely on the maturity of these fourth-year players as it begins to integrate younger talent into the lineup.

Hoover specifically mentioned setter Shannon Carroll, middle blocker Sylvia Wojslaw, middle blocker Catie Weinman, libero Sara Prenner and outside hitter Cynthia Karnezis as the seniors who will play a big role for Glenbrook South this fall. However, the lineup isn’t set in stone, and the coach is hoping some younger players emerge as valuable contributors.

“Practice has been extremely competitive so far,” Hoover said. “Everyone is hustling. And everyone is fighting for a spot in the starting lineup yet the girls are working together to improve our court chemistry.”

Loyola coach Mark Chang has seen great improvement from his team in preseason camp, and he credits summer volleyball for that. Many Ramblers play year-round, allowing them to work on their skills even when not playing for Loyola. Chang said that effort will help the team on the court this season.

“We’ve seen growth in all our players, but none of them have peaked,” Chang said. “I’m excited to see what we can do. This time of the year is all about working with the players and trying to improve every day.”

The Ramblers have to overcome the loss of seven seniors from last season’s team, which reached the Class 4A New Trier Sectional final. Chang said that a long playoff run is once again the team’s goal, along with competing for a championship in the always-competitive GCAC.

Before the regular season has even begun, the Spartans are dealing with a noteworthy injury.

Glenbrook North will be without senior Isabel Vargas, who last week underwent hip surgery. Coach Christopher Cooper said Vargas is doing well, but he is not sure when she will return to the court.

The absence of Vargas means the team has no returning starters from a year ago, when Glenbrook North reached the Class 4A Conant Sectional semifinals. Cooper is hopeful the team will be a strong passing and defensive team, as the Spartans do not have a lot of size. Still, expectations haven’t been lowered.

“Even with a lot of new faces and some injuries, we should be fairly competitive,” the coach said.

Coach Kelly Dietz is excited for the debut of junior Katie Winslow, who previously played at New Trier. Winslow practiced with the Raiders last fall, but was not able to play in games because of transfer rules. This season she will finally take the court, and Dietz is excited to see what she can do.

“We will have a strong offense this season,” Dietz said. “We have lots of young players who got varsity experience a year ago. And we add Katie, who can play anywhere and is well-rounded.”

Having graduated eight seniors, this may be a rebuilding year for Regina. Coach Robert Hughes said that he is trying to build the programs “from the ground up.” That means a lot of playing time for younger players.

The team also emphasized strength and conditioning this offseason in an attempt to be better prepared for the 2014 season. With so many young players on the roster, Hughes wants to establish depth, giving him more options to work with in terms of lineups. The Panthers have already suffered some injuries in preseason workouts, though, so that depth will be tested early in the year.

If the Maine East girls volleyball team is to have a successful season, veteran leadership will be important. The Blue Demons return five starters from last year, including Hannah Farley and Sarah Hua-Pham, who are entering their fourth varsity seasons. That experience will be beneficial when conference play begins, according to coach Ann Bezek.

“It helps so much,” Bezek said of Farley and Hua-Pham. “Their leadership is huge for the team. They’re like mini-assistant coaches. They’re all about the team and don’t have any sort of personal agenda.”

The coach said with so many returning players, the Blue Demons can hit the ground running. Most of the roster is familiar with the team’s offensive and defensive strategies. Bezek thinks her team has a ton of potential, and if everything goes well, this will be the strongest Maine East team in years. It could be one that can compete for a CSL North title.

The Hawks won a regional championship last year behind their seniors. With eight key players graduated, the team will need new players to step up. Though some could see it as a rebuilding year, coach Peter King is optimistic that two players who missed much of last season will make a big impact this fall.

Seniors Maxine Kasznia and Nora Quinn, who has verbally committed to Fairfield, missed a majority of the 2013 season because of injuries, but came back for the playoffs to help the team win the regional. Healthy from the start of the season, they’ll be key for Maine South’s success on the floor. They’ll also be leaders for their younger teammates in the locker room.

Senior outside hitter Lindsey Acker also is expected to be a key member of the team.

“We graduated both outsides last year,” King said. “Lindsey in the offseason really worked on her consistency as a hitter and her aggressive play. She has really shown how to step up and has earned her way to become one of the outsides for this year.”

Olivia Rusek was the star for the Wolves last season, but she now plays for Miami (Ohio). Still, coach Stacy Metoyer thinks Niles West has a lot of young talent, and she is eager to see what they can do.

“We will have more people to distribute the ball to this season,” Metoyer said. “A lot of our kids played club volleyball over the summer and come into the year a lot better than they were last season.”

Metoyer mentioned sophomore Kaila Johanson and junior Dominque Krason as two players who will be important to the Wolves’ success. Both played on the varsity a year ago and should play more prominent roles with Rusek gone.

After a couple of down years, the Rebels are hopeful they will approach the .500 mark in 2014.

Ridgewood won only five matches in each of the last two seasons, but coach Dave Wlodarczyk is optimistic his team can turn things around. The roster features several returning players from previous seasons, including senior outside hitter Natasa Papulic, who the coach said “really came into her own last season.” Wlodarczyk also spoke highly of junior Monica Zygula, who will be Ridgewood’s middle hitter.

The experienced roster means that Wlodarczyk can teach advanced plays and not need to worry about basic sets.

“They know the defense and we can start running plays right away,” Wlodarczyk said. “It’s a leg up from before.”

Outside hitter Taylor Louis has moved on to Marquette, and that’s a major loss for Niles North. Louis was one of the top players in the area last season and was the key player in the team’s attack. Without her, the Vikings will have to change the way they play.

Coach Michael Cott said his roster is young and will improve as the season goes along. The team will attempt to work with several players in Louis’ old role.

“We’re a work in progress early on, kind of a transition period,” Cott said. “With our youth, it will take some time to adjust, but we’ll be much better in a month than we are today.”

The Griffins are looking for their best season since 2011, when they won a regional title.