Defending 8A champ Naperville Central returns a slew of experience intent on a repeat performance. 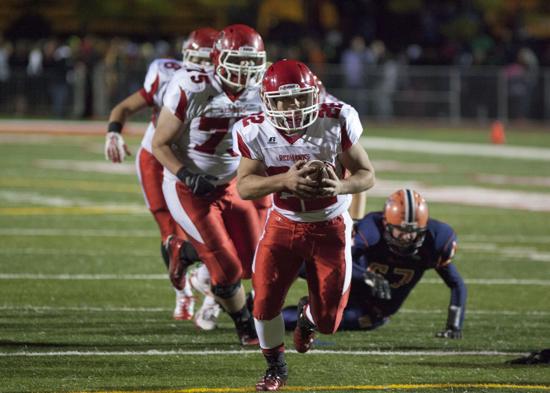 "There were some good things and some bad," the senior running back said. "Penalties killed us. Need to try to stay clean with everything. The other thing is effort — there were a lot of loafs."

But there's no question the Redhawks also have a significant upside. The No. 9 team in the Sun-Times

Four senior starters are back on defense: Joe Schweikart on the line, Bobby McMillen (80 solo tackles, 46 assists, 10 sacks) and Dan DelGrosso at linebacker and Kolzow in the secondary.

Naperville Central may not be in championship form out of the gate in 2014. But that's OK; last year's club survived three straight losses after a 5-0 start. The idea is to get the newcomers up to speed as quickly as possible and go from there.

"It's a different game," Clifford said of the transition from sophomore ball. "It's not easy coming up and playing varsity football at a big school like Naperville Central. ...

This team could have a different focus on offense as junior quarterback Conor Joyce takes over for Jake Kolbe, who's now at Illinois State.

"He can run it, he has a strong arm," coach Mike Stine said of Joyce. "He's a versatile quarterback."

Clifford is prepared to get more carries this season. "I trained over at Acceleration [Sports Performance in Naperville] with McMillen and Kolzow," he said. "I was at 185 [pounds] in the state game, 170 now. I worked on my core and on losing weight in my legs."

"Kevin Clifford's going to be great if he stays healthy," Stine said. "He's going to surprise some people. He hasn't gotten a lot of fanfare."

But the Redhawks do want to be balanced, and Kolzow (an Illinois State commit) and Rugamba (who has an offer from Illinois) figure to prevent opponents from stacking the box to stop Clifford.

The offensive line is a work in progress with five new starters. But, Clifford said, that group "shows a lot of potential as well."

On the other side of the ball, the unquestioned leader is McMillen, a three-star prospect committed to Iowa State who will be a three-year starter.

But he will have help. DelGrosso is "as athletic as Bobby," according to Stine, while Schweikart is "a great guy coming off the edge." And Kolzow showed his defensive chops in last year's 8A semifinal win over Marist when he picked off two passes, returning one for a touchdown.

The Redhawks also have one of the state's best kickers in junior Connor Assalley, who kicked two field goals in the 8A championship game and was 8-of-9 for the season.