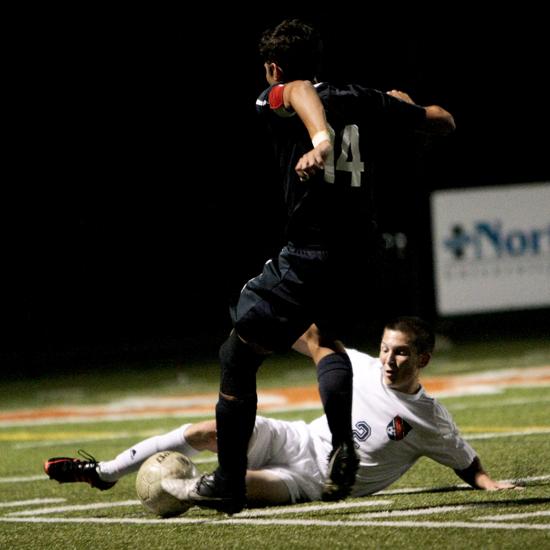 The vast majority of area boys soccer teams have held tryouts and prepared for the season locally during the preseason, but North Shore Country Day was scheduled to spend more than a week of its preseason across the Atlantic in England.

The Raiders, who return 10 starters, visited Manchester, London and Liverpool. They trained with professional coaches at Everton and Fulham, Raiders coach Kyle Jones said via email, and worked with Egerton Youth Club in Knutsford, Cheshire.

Jones is a native of Manchester.

Seong Ha is a busy man.

Not only is he a business education teacher at Glenbrook South and the Titans’ girls soccer coach, Ha is in the midst of his first year as the school’s boys varsity coach. He’s also a coach at FC United.

“I say this a lot: I have four full-time jobs,” Ha said, with a laugh.

“I feel very, very fortunate,” he said. “I’m not trying to sound rah-rah, but it’s not a job for me. Teaching and coaching, it’s really not a job. It’s really a lot of fun to do what I do. I feel I’m pretty lucky.”

Ha takes over a team that lost 17 seniors from a year ago and is led by junior goalie Perry Adamopolous.

Glenbrook North coach Paul Vignocchi was a goalie during his playing career, and he said he’s always had the outlook that the best way to build a soccer team is from the back up.

That’s how the Spartans are constructed this year. Junior Ian Albert is scheduled to start in goal. They return senior Craig Angelbeck, as well as sophomores Jackson Grabill and Seth Grossman, on defense from last year’s squad. Senior Will Crockford, who played club soccer with the Chicago Fire last fall, also will play defense this year, and seniors Jack Tatham and Josh Hakimian will both be part of the rotation.

The Spartans also will have one of the most experienced midfields around as seniors Ethan Glass, Tommy Metzger and Jake Santellano, who has verbally committed to Wisconsin-Whitewater, are all three-year varsity players.

Yet the big question entering the season is: Where are the goals going to come from?

“If we can just finish our opportunities, we can have a nice season because I think we’ll defend really well,” Vignocchi said.

Metzger, Glass and senior forward Patrick Pekala are expected to be the team’s primary goal-scoring threats.

Another source of excitement for Molyneaux and the Trevians is their options at forward. New Trier, which went 12-4-7 last season and struggled to score at times, has four more-than-capable forwards. The list includes juniors Michael Gallo and Spencer Farina, as well as seniors Tommy Belliel and Duncan Gill. They will provide Molyneaux with flexibility and should combine to make the Trevians more dangerous this year.

“I think we have some opportunities to kind of shift guys in different places — to give looks to different teams, depending on what they’re allowing us to do and what they’re giving us,” Molyneaux said of the forwards.

“They all bring different things to the field. That’s what I’m most excited about, is we can have three, even four, of them on the field at the same time. And they’re all goal scorers. They can all put the ball into the back of the net in different ways, and they all have high enough skill levels to feed each other and assist each other.”

Some teams are able to lean on one or two high-end forwards to score a bevy of goals and carry the offense. Loyola doesn’t appear to be one of those teams.

Ramblers coach Rob Etheridge said the Ramblers, who return three starters from last year’s squad, will need players in a variety of places on the field to score goals.

“The last couple of years, we haven’t really done well offensively and it’s probably going to be the same this year,” Etheridge said. “We need to work on getting people in good positions to score. ... We’ll work on our finishing for all our players, but we’ve got to get goals from all sorts of positions. We can’t just rely on forwards. We’ve got to get our midfield players getting their share of the goals and our forward players getting their share of goals, too.”

Evanston returns a talented, experienced core on defense from its CSL South championship team in 2013. That group is led by senior center back Bret Lowry, an all-state selection a year ago. It also features second-year goalie Adam Masters, a junior, senior Mark Roth and senior Ben Osterlund.

The Wildkits don’t have that type of experience at forward, but they’ll look to senior outside midfielder Oli Jacques and relatively new faces like junior Erick Balthazar and seniors Arturo Ramirez, Christian Rodriguez and John Tsingas for offense this season.

“I think goals are going to come from many places,” said Evanston coach Franz Calixte, who added that he wouldn’t be surprised if all five of those players finish with a handful of goals this year.

Participation hit a valley at Roycemore last year. The Griffins had 11 players on their roster, and they played with 10 in their Class 1A regional final when one didn’t show up.

Roycemore’s numbers are back up to about 20 this year, according to coach Ilan Ben Sura. Sura and assistant coach Joe Wright spent part of the offseason trying to increase interest in the sport at Roycemore.

“We actually did a lot of activities during the summer,” Sura said. “We actually did open gyms that were focusing on indoor soccer, and we were contacting a lot of people during the summer, trying to ask them and convince them and telling them that this year would be different [in terms of success]. I think that is one of the reasons why we have more people. I also think we have a lot of new people that just want to play soccer [for the first time] or played soccer before.”

The Maine South boys soccer team returns six of its seven leading scorers from a team that scored 50 goals a year ago, but the Hawks’ defense is inexperienced at the varsity level.

Senior Jakub Opiola, an outside back who played club soccer with the Chicago Magic last fall, is expected to help the back line. Maine South coach Dan States said seniors Michael Gabel, Paul Gaudyn and Alex Solberg are all candidates to see significant time at center back, with Opiola possibly moving inside at times.

Having the defenders gel early in the year figures to be key for the Hawks, who will be led by senior midfielder Michael Banas and senior forward Agostino Lappo.

“We’re going to open up with Fremd [on Aug. 25] and then two days later, we have Sandburg, so two of the perennial [powers] in the state will test us early,” States said. “It’ll be good experience for those guys.”

The captain was in charge of getting his teammates into the weight room for strength and conditioning, Niles West coach Scott Ackman said, and he ran captains’ practices.

“He’s probably one of the best captains I’ve ever had,” Ackman said. “The kids really look up to him. He’s been on varsity for four years; he’s the only kid that’s done that on [this year’s team]. He’s just a great role model.”

Fellow midfielders Edgar Rodriguez and Anthony Morales also will be senior captains, providing the Wolves with a great deal of experience and leadership in the middle of their formation.

Niles North will have to replace an eight-person senior class that helped the Vikings win their first CSL North title last season.

Ridgewood switched its formation in the offseason, going from a 4-4-2 to a 4-5-1. The 4-5-1 will change the job descriptions of two of the Rebels’ best players.

Senior Jakub Korzec will still play as a striker, but a big component of being the lone forward in a 4-5-1 is holding the ball and then distributing it.

“Those two outside mids in the 4-5-1 really have to work hard,” Ridgewood coach Rob St. John said. “They’re constantly up and down the field, providing solid defense and then transitioning into two forwards at times. They did a great job [this summer]. They really did.”

Northridge coach Desmond Ryan has a rather unique choice to make during the opening weeks of the season. He’s trying to decide where to use senior Conner Mongoven, who excels as both a forward and a goalkeeper.

Ryan said Mongoven is a potential all-stater as a goalkeeper — he was an all-conference selection last year — and added that he’s likely to play there in college. Mongoven’s also a very skilled striker capable of providing much-needed scoring.

“He’s phenomenal out of the air [as a forward],” Ryan said. “He’s phenomenal on the first touch. He’s got great speed, especially for a goalie. All the years I played, goalies are not usually known as the speedsters of the team.”

Mike Smith has been a big part of Notre Dame soccer in recent years, first as a player for the Dons from 2003-07 and then as a coach in the program’s lower levels. Now, he’s the varsity coach.

Smith was appointed to the position in June.

“I’ve been around Notre Dame soccer for probably the last 15 years,” he said. “Taking the head coach position is a big-time dream come true for me.”

Maine East tried using a 4-4-2 formation with a flat back four near the end of last season, but it didn’t work. The Blue Demons’ offside trap was exposed, first-year Maine East coach Jeff Bishop said, which forced them to switch back to a sweeper-stopper system.

Bishop re-implemented the 4-4-2 this summer. The team was able to take its time growing accustomed to it, and the 4-4-2 will be one of the Blue Demons’ two primary formations — with one major difference.

“This year, we’re running that formation except we told them that it’s not necessary to hold that high line and get in a foot race,” Bishop said. “You’re allowed to drop off like you would in any other defensive formation. They really kind of took to that and it kind of clicked for them.”

Bishop was the Maine East assistant varsity coach for the last five years and replaces Vic DiPrizio, who retired after last season. Bishop will look to senior captain Alex Lulek to be a leader of that defensive unit. Seniors Narmsn Keso and Matt Pytel also figure to be key players for the Blue Demons this year.