Cary-Grove heads into this season with 16 returning starters from a 7-4 club and the belief that 2014 could be a year to remember. 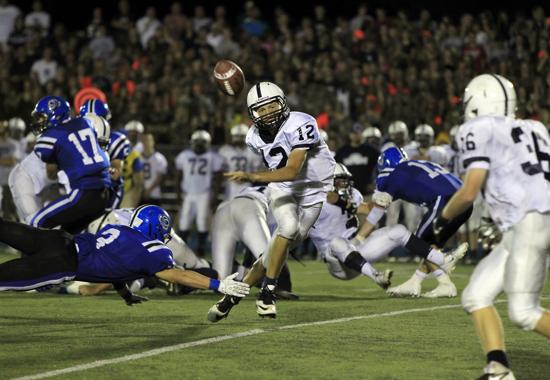 Don't look now, but Cary-Grove has the makings of another big season.

Many of the current Trojans had success with the Junior Trojans youth program and remember watching Cary-Grove's run to the Class 6A title in 2009. Three of them also started on the 2012 6A runner-up club as sophomores.

Now the Trojans — No. 8 in the Sun-Times Preseason Super 25 — head into this season with 16 returning starters from a 7-4 club and the belief that 2014 could be a year to remember.

"I felt that way last year," coach Brad Seaburg said, "Then you get some injuries and there's that ripple effect that happens."

Still, he added, "our leadership has been on a par with the good teams of the past. We have the pieces in place to have a good year."

And the desire to add to the tradition of a program that is 24-9 in the IHSA playoffs since 2004.

"A couple of years from now, no one is going to remember us if we don't do something special," senior offensive lineman Trevor Ruhland said.

Ruhland, a 6-foot-4, 275-pound Notre Dame recruit, is one of three starters back from the state runner-up team along with fellow lineman Michael Gomez (6-0, 270) and safety/running back Matt Sutherland.

Ruhland, Gomez and fellow senior Scott Topole (6-4, 240) are the leaders up front with juniors P.J. Bardgett and Ross Bernier also in the mix.

They will be charged with opening holes for a deep group of backs in the Trojans' option attack.

Sophomore fullback Tyler Pennington had a big season as a freshman on the varsity, running for 1,050 yards and eight touchdowns.

"A couple of years from now, he's going to be an absolute stud," Ruhland said.

Senior quarterback Jason Gregoire, a varsity contributor since he was an injury fill-in as a sophomore, combined for around 1,300 yards and 18 TDs passing and running last year.

"He's a tall, skinny basketball kid," Ruhland said. "He knows how to run the option."

Sutherland added 395 yards (4.9 per carry) and eight scores on the ground last year. There's more experience in the backfield, too: In 2013, only two carries all season went to seniors. Junior Kevin Hughes and seniors Zach McQuade and Larkin Hanselmann are still more candidates to carry the ball.

"Between those six guys, we feel we've got a pretty good backfield," Seaburg said.

When Gregoire throws the football, he'll look to a pair of juniors in wideout Jimmy Freskos and tight end Erik Norberg,

From observations in practice, Ruhland believes there's also a solid group on the other side of the ball.

"We made a lot of progress, especially on the defensive side," he said. "Coming into camp, we had a lot of question marks; every year you have slots to fill. We've had a lot of seniors and young guys step up."

Gomez — "Fifteen pounds heavier and in tremendous physical shape," according to Seaburg — and senior Ray Dimatteo are back to anchor the defensive line.

The linebacking corps will be new, but there's lots of experience in the secondary, where five seniors return: Sutherland, Hanselmann, Willie Hartke, George Hartke and Travis Meyerson.

Those varsity veterans have plenty of expectations on their shoulders.

"It's good to know we're kind of respected," Ruhland said. "But none of that stuff matters come five days from now. It's go time."