Vernon Hills’ athletic teams will play familiar North Suburban Conference opponents during the 2014-15 school year. Who the Cougars play after that is anybody’s guess. 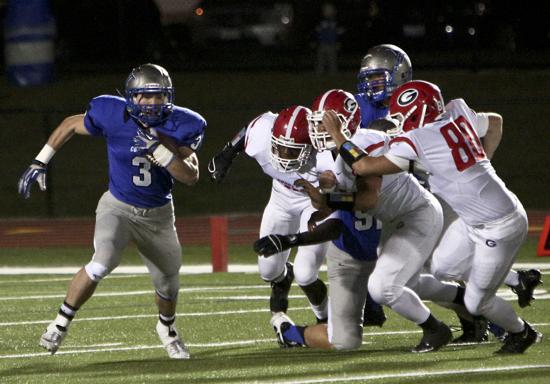 But the Cougars’ opponents beyond that is anybody’s guess.

This summer, five schools in the NSC’s seven-team Prairie Division voted to leave and form their own conference.  A sixth, North Chicago, is expected to pass a resolution Thursday night.

That leaves Vernon Hills, which could elect to join seven teams in the still-intact Lake Division. But Vernon Hills Athletic Director Brian McDonald said the school is keeping its options open.

“Right now, we are in the North Suburban Conference,” McDonald said. “There’s a possibility of joining a different conference. There’s the possibility of remaining. We are trying at this point to generate options.”

Based on interviews with multiple area athletic directors, it seems the most likely outcome is that Vernon Hills will remain in the NSC.

“There are still questions out there, but we are hopeful of them remaining in the NSC,” Stevenson Athletic Director Trish Betthauser said. “There is less work in terms of revising the constitution and philosophically how we conduct ourselves.”

Betthauser cited the proximity of Vernon Hills to Lake Division schools such as Stevenson, Mundelein, Libertyville and Lake Zurich as a reason the Cougars might elect to stay. She also said that offering sports like swimming, gymnastics and bowling already puts the Cougars more in line with Lake Division athletic programs.

“The scope of the programs, those [sports] are not all offered on the Prairie side,” Betthauser said. “[Vernon Hills] has established themselves, locally and regionally. They put out remarkable teams.”

Libertyville and Vernon Hills are both part of Community High School District 128. Libertyville Athletic Director Briant Kelly said scheduling wouldn’t be significantly affected if the Cougars remain in the NSC, but there will be changed to end-of-season tournaments.

“Conference championships will change,” Kelly said. “Instead of a 14-team championship in wrestling or tennis or track, it will be smaller.”

One concern is that Vernon Hills’ enrollment of 1,316 students would make it the smallest in a re-aligned NSC. Warren tops NSC enrollment with 4,262 students, followed by Stevenson with 3,761. The closet school to Vernon Hills is Lake Forest, with 1,656 students.

“It’s tough competing against schools with two or three times as many students,” Kelly said. “That’s a bit of a concern.”

“Our only issue is the size of the schools,” McDonald said. “They [the Lake Division schools] are larger than us. That’s our hang-up.”