St. Charles East will try to duplicate what the Saints' girls team accomplished last spring during its state runner-up finish. 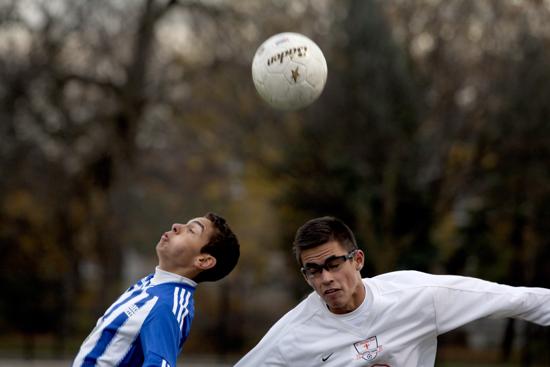 One by one, the students ran onto the field at Lake Park last June in spontaneous celebration as St. Charles East's girls team defeated Huntley in a Class 3A supersectional.

A significant number of the celebrants were members of the boys’ team. Saints’ coach Paul Jennison coaches both programs. As he took part in the celebration, Jennison seized the opportunity for a coaching moment. “Remember this, and the feeling, and we’ll get there, too, in the fall,” Jennison instructed several of them.

The unheralded girls program rode the momentum to a state runner-up finish against New Trier.

“We weren’t favored in a lot of those [state tournament] games, and we beat a lot of bigger names and it was good to have a different perspective,” Jennison said.

The symbolism of that day was not lost on the boys team. It was Lake Park that ended their season in the Class 3A sectionals last fall. Now, a reloaded and refocused Saints’ team is geared up for matching the play of their girls’ side.

“They were very proud of what the girls had done, and I’m quite sure it left them with a certain disappointment, knowing that we’d fallen a little short in that playoff run,” he said.

The start of the 2014 season is more volatile than ever in boys soccer, marked by uncertain and a heavy turnover. Only four of the 33 players named to the Sun-Times All-Area team from last year are back this year.

Other programs have been hurt by the club defections of top-rated players.

Against that backdrop, the Saints are a model of consistency, a veteran squad that showcases power, speed and skill. In a wide-open and topsy-turvy season, St. Charles East opens the year on top.

The team holds a vast physical edge over their opponents. St. Charles East features 11 players on its roster who are at least 5-10 or taller, with four players standing at least 6-2. “They’re smart, hard-working and the play the right brand of soccer,” Jennison said. “They possess the ball with a purpose.”

Senior forward Zach Manibog is the team’s offensive catalyst. At 6-foot, he epitomizes the team’s strong physical attributes who blends range and speed and is a superb finisher around the goal, according to Jennison.

“He is going to get the bulk of the scoring chances for us up front,” Jennison said. In the middle, the Saints have two players, seniors Jordan Moore and Taylor Ortiz, who both made honorable mention all-state last year.

Brandon Villanueva is a two-year starter on the backline, and his size and physical style of play sets the tone for an aggressive and skilled unit that posted 15 shutouts a year ago. Kyle McClean, Ryan Stackhouse and Robert Wolak make up the ferocious backline.

St. Charles East is going to be tested right off the start, with first week games against No. 5 Neuqua Valley, Public League power Kelly and the highly-touted New Trier Invitational.