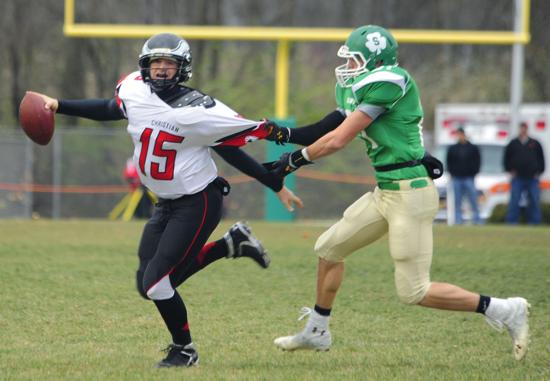 The more things change, reads an old proverb, the more they stay the same. David Beebe hopes so.

The new Aurora Christian coach has a multitude of new faces in his starting lineup and will play in a new league – Chicago Catholic White – but he’s optimistic the results will be much the same for the Eagles.

“Of the 22, there’s two starters back,” Beebe said. “Austin Bray at quarterback and (center) Jake Smith, who was really only a part-time guy. On defense, I’ve got 11 brand new starters. The number of solo tackles we had last year from guys coming back is about 12.”

The good thing about the coaching change is that it’s basically in name only.

Beebe was the team’s defensive coordinator for brother Don’s 10-year run that featured 10 straight playoff appearances and a 97-26 record.

And Don hasn’t left. He will still oversee the offense, missing just one game as he travels to see all of son Chad’s college games for NIU. Last year’s JV head coach Jeremiah Chaney is working with Don and will call the plays that day.

“If I had to pick one guy I wanted coming back, it would be my quarterback,” David Beebe said of the 6-foot-4, 230-pound Bray, who threw for 1,802 yards with 26 TDs and six interceptions in last season’s run to the Class 3A semifinals.

Bray missed three games with an injury to his non-throwing shoulder.

“I feel more closer, from a chemistry standpoint, to this team,” Bray said. “I feel like this team can go far, too. Last year’s line was great, but we have a lot of talent this year, too.

“I’m super comfortable and feel like a different quarterback, confidence-wise.”

A third-place finish in the 32-team Southwest Elite Tournament in Arkansas this summer helped, as does having a year under his belt as a starter.

“I think we’ll see the real Austion come out now,” Beebe said. “My hope is he develops like Anthony (Maddie, now at NIU) did from 2010 to 2011 between his junior and senior years. Don runs a complex offense and it’s a lot to absorb. Once the game slows down, it becomes a lot easier.”

Bray figures to have a talented group of receivers and runners that include senior Jacolby Maxwell, who sat out last year after transferring from Waubonsie Valley, Jeremiah Wiggins, Zach Bosek, Nick Edlund (St. Charles North), Ryan Burke and Dusty Barrett.

Brock Whalen, a 6-4, 265-pound two-way tackle who transferred from Minooka and is drawing Mid-American Conference recruiting interest, should anchor both lines at tackle and be joined on offense by Smith and Matt Ward, who also saw action as a backup last season. Sean Kuhn, Ross Krantz and Joe Betterman.

Bosek, Betterman and Wiggins lead the linebacker group, Whalen, Smith and Krantz the line and Nick Van Gilse, Edlund, Burke and Jake Richardson the secondary of a young defense.

“The last few years I’ve had kids who were two- and three-year starters,” Beebe said. “We had to start from the beginning with how we line up, where we take our first step.

“The big pluses about this team are its chemistry and feistiness, which is fantastic. From week 1 to week 9, this team will grow the most of any we may have had.”

With a stretch of games late in the year that include Bishop McNamara, St. Rita, St. Laurence and Marmion, that had better be true.