Genoa-Kingston's Griffin McNeal has work cut out for him

With numerous positions undecided on an inexperienced Genoa-Kingston team, Griffin McNeal’s leadership ability will be tested even more than last year. 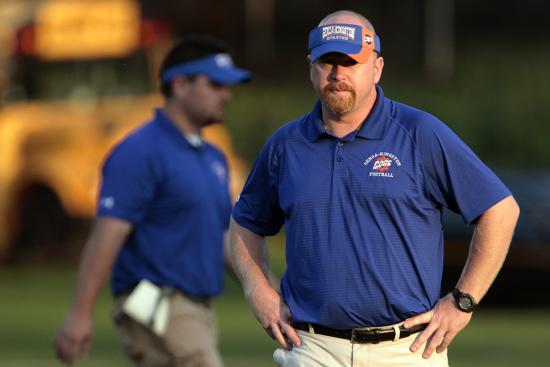 With numerous positions undecided on an inexperienced Genoa-Kingston team, Griffin McNeal’s leadership ability will be tested even more than last year.

As a junior, the Cogs quarterback benefited from a veteran roster and led several comebacks in a 5-1 conference finish. Now, his abilities may be necessary to carry a largely inexperienced team in the Big Northern East.

“The good team last year did take some of the pressure off, and for a junior he had a great year,” coach Travis Frederick said. “Teams couldn’t put us away, and now he’s a little taller and faster. He was all-conference last year because he was nominated by the other coaches —‚ that’s how much they thought of him.”

McNeal threw for 1,199 yards and 13 touchdowns last season, and although the Cogs have plenty of inexperience, McNeal does have a few experienced weapons available. Senior running back Jesse Bade returns after rotating in last year. Senior fullback Joe Murray is another threat in the Cogs’ wing-T offense.

“He’s quick off the ball and at 170 (pounds) plays fast, and with that quickness he’s a help to us on the defensive line, too,” Frederick said.

“We’re going to lean a lot on Griffin, so I feel comfortable enough with our offense that if we need to throw, we can,” Frederick said. “I remember plenty of years when we had no passing threat at quarterback, and that’s not a good feeling.”

The biggest offensive problem could be inexperience on the line, where Anthony Lacko is the only returning starter and the rest of the positions remained up for grabs going into the final week of preparation for the opener with St. Edward.

There is some good size with seniors Tyler Bennett, Matt Beaulieu, Justin Johnson and Nicholas Cotham, and juniors Austin Ruchti, Daniel Russell and Dale Warren. Many of the offensive linemen also will play on the defensive side.

Lacko is the leader on defense at middle linebacker for a group that can use a 4-3 or 4-4, and senior Keegan Cline is the other experienced linebacker. Frederick hopes one of several inexperienced players can step forth at the other spots.

While Murray is the key defensive lineman with an inexperienced group, the secondary has numerous solid athletes, but also lacks experience. Ruiz, Fell and Rogers will be joined by McNeal and Huffman back there at times.

“We have a lot of bodies who could be in that secondary helping out,” Frederick said.

The Cogs are counting on success to breed success, even if they don’t have a lot of returning proven players.

“We’re hoping the winning carries over and some of the guys are able to come around quickly,” Frederick said.