The positive for Burlington Central of just missing the playoffs last year with a young team is coach Rich Crabel has a roster of experienced talent focused on returning to the postseason and winning the Big Northern East. 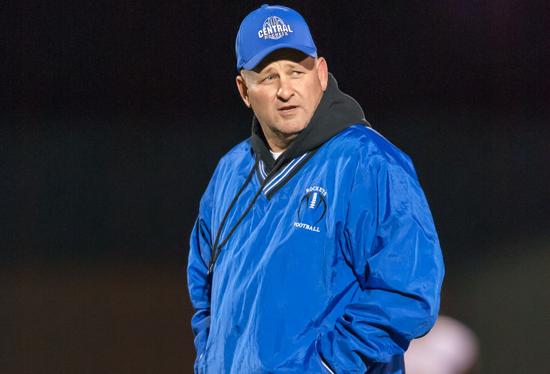 The positive for Burlington Central of just missing the playoffs last year with a young team is coach Rich Crabel has a roster of experienced talent focused on returning to the postseason and winning the Big Northern East.

“We do have a good returning senior class, and several who’ve been starting for two years or more,” Crabel said. “We’re only one player short of being able to play full platoon football.

“That doesn’t mean we’re great at all those positions, but we’re pretty good. I believe in the philosophy that if you can do that, by the third or fourth quarter we’ll be fresher.”

The experience shows up best at linebacker, where seniors Cole Roach and Craig Kein are in their third years as starters. Senior Anton Christensen is another linebacker who saw action last year. The fourth linebacker is junior Brad Sorensen, a second-year varsity player.

The defensive line lacks great size, but has plenty of experience with seniors Devon Bennett, Kyle Blankenburg and Zach Gorman at tackle, and Branden Sorensen, Charlie Sanders and Kyle Schejbal at ends. The secondary has senior Kyle Trumbower at safety and David Streder and Mohammed Aburmishan on the corners. The only junior, safety Adam Skirmont, played a big role with the varsity as a sophomore.

“We’ve got two juniors pushing our corners every day, so we’ve got depth back there,” Crabel said.

The Rockets had near-playoff misses the past two years, but part of the problem was losing quarterbacks to injuries. In 2013, quarterback Robert Doubek suffered a shoulder injury in scrimmage and missed the entire season. He’s back as a junior.

“He worked his rear off and rehabbed and lifted and has a little edge over Adam (Skirmont),” Crabel said. “We like his arm and leadership.”

It could be easier to keep Doubek healthy with an offensive line returning four starters: seniors Matt Overstreet, Zach Garbacz and Joseph Vitraelli, and junior Esteban Escobar. Center James Ankrom was with the sophomores last year.

“They took their lumps last year early, but they’re back, stronger and bigger,” Crabel said. “We think we can run behind them.”

When Doubek throws, he has potentially dangerous targets in tight end Brenden Bushy, a 6-foot-4 baseball player out for the first time who has a big reach; 6-4 James Mahoney and 6-foot Andrew Lippert.

Fleet-footed junior flanker Tim Goehrke (broken finger) should be back by Week 2 or 3.

“His speed gives us another dimension,” Crabel said.

The Sorensens are competing at kicker, and Crabel also is considering another option.

“If they’re not consistent we’ll go for two every time,” he said. “You only have to get every other one. And I’m very serious. We lost to Richmond-Burton on a missed kick in overtime last year.”