Mount Carmel will feature many new faces in starting positions this season, but long-time coach Frank Lenti is still looking to continue the Caravan's Class 7A success. 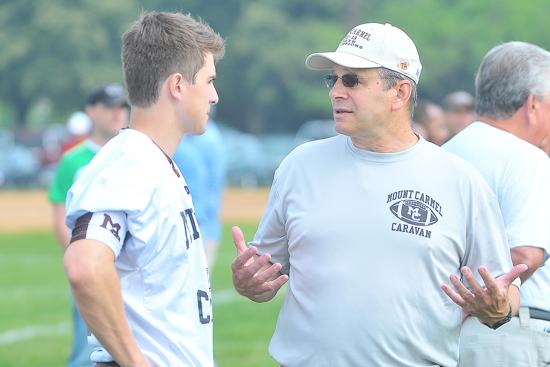 Other than the brown-and-white uniforms on the players and the state's all-time winningest coach on the sideline, you may not recognize much about this Mount Carmel football team.

Gone is the Class of 2014, more than a few to Division I programs, after playing starring roles on a pair of state championship teams. In its place is a group of talented, but mostly unproven, players hoping to keep the Caravan rolling along.

"We told the kids after the parents' day scrimmage, we're going to have to look this stuff over and see who gets it the best," coach Frank Lenti said. "They're starting to get it. That's a good thing."

Senior linebacker Troy Weissenhofer, one of four returning defensive starters, also is seeing progress. He'd like to see more, though.

"We're doing pretty good," Weissenhofer said. "We can always do better. Saturday [at the scrimmage] we didn't do as well as we should have."

Only one offensive starter returns from the team that beat Lake Zurich 30-0 in last year's Class 7A final: 6-3, 291-pound guard Jack White. Another anchor up front should be senior tackle AJ Duerig (6-3, 278), a transfer from Lowell (Indiana) who has committed to Syracuse.

The new quarterback in charge of the Caravan's venerable option attack is junior Anthony Thompson (5-11, 179), who backed up Marko Boricich last season. "Marko was a big, strong, physical guy," Lenti said of the 6-2, 210-pounder.

"Anthony is going to be more in the Donny Butkus mode."

Butkus preceded Boricich as Mount Carmel's quarterback, finishing with more than 1,600 yards of total offense during the Caravan's 2012 Class 8A title run.

Also gone are a pair of 1,000-yard rushers in Matt Domer and Jimmy Mickens. Senior Jaquan Bunton, the third-leading runner last season with 504 yards (7.6 a carry), is back but may play more in the defensive backfield this year.

"I think we're going to be pretty solid with the defensive line with the Greer brothers," Lenti said of DeAndre and junior Terrell (5-9, 255).

The Caravan opens against Philadelphia St. Joseph, which is ranked No. 1 in Pennsylvania and eighth nationally by Football News.

Mount Carmel does have a little extra practice time because its first game isn't until Sunday. But with so many inexperienced players, Lenti said, "That's a concern: Are they ready?

"The biggest thing we had to talk to them about recently was leadership and complacency. You're not going to get credit for how good we were last year."

"Yes, that's our main focus right now," Weissenhofer said. "A lot of guys think this is just a joke. We try to tell them we haven't won anything. We're definitely cracking down on them to get focused and fast."