Grayslake Central's season could be feast or famine

It is very difficult to predict how Grayslake Central will perform in 2014 in a conference where the good and bad teams are clearly marked. 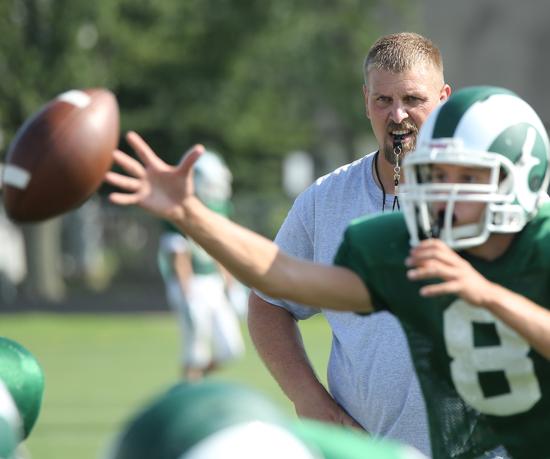 Here’s the best way to explain what’s ahead for Grayslake Central football fans this fall: In this area, the really good teams are obvious (Stevenson, Lakes, Lake Zurich, etc.). The really bad teams are also obvious, and there’s no need for a detailed explanation.

Finally there are a handful of teams that have question marks next to their names. Grayslake Central falls into this category.

“The attitude and effort have been good. You never know how it’s going to go with a coaching change. Being on staff last year and not being completely new helped a little bit.”

Here’s what the new coach had to say on a variety of subjects related to Ram football in 2014:

Q) On graduating some key players and what they have coming back:

“For us defensively, we graduated all three D-linemen, which hurts. Those guys were solid ballplayers. That had good size and good motors. This year we’re going to be a little smaller up front but, in turn, we’re faster.

“We lose Ryan Aoki (at linebacker), but Billy Barrett will move over to middle linebacker from the outside. He got plenty of experience last year and learned from a great senior in Ryan. I think we’ll still be pretty good there.”

“Offensively, we lost our two tackles, but we brought back our guards and center. We’re working on filling those holes, and guys are doing a good job.”

“We’ve been running more spread, because we’re trying to get more athletes on the field. We’ll see how it goods.”

Q) Do the Rams have the skill players to put up points or will they have to grind out games?

“I think we have the guys to put up points. In our four-wide set, we have Cam (Schwartz) and DeJuan (Ali). Add in Noah Comerford and Kevin (Dunk), and that’s four guys with good speed and good hands. Now, we just have to move the ball down the field. One of my goals this year is to put some more points on the board. The guys are there, but I have to put them in the right spots and make sure they’re executing.”

Q) What about junior Luke Shepherd replacing the graduated Alex Lennartz at quarterback?

“Shepherd, for a junior, is right where he should be, maybe even a step or two ahead. He looks bigger than some of our linemen. When you have a 6-3, 225-pound quarterback, you’re not going to complain. Hopefully, with him back there we can learn and grow as a team.”

“Ben is our defensive coordinator, and he’s been doing a great job. We’re keeping the same defensive scheme we had last year. We might even simplify it a bit.”

Q) On the other side of town, they’ve established some momentum in their program to the point that the expectation is making the playoffs and competing for the conference title. What has to happen for that to happen at Central?

“There’s an extended process. The first thing I have to do is bring some stability in the staff., This year we 14 have coaches — nine are working with the varsity and sophomore team, and five with the freshmen. Once we have stability and the kids understand that these are the coaches we’re going to play for, it’s going to help.

“The next step is me reaching out to the youth programs and getting more involved there. We have to get the (Grayslake) Colts (youth football players) involved in what we’re doing. When I was in high school, every kid in Naperville had been running the same offense for 7-8 years, to the point that both high schools ran the same offense. So we need to reach out and familiarize the kids with the way we do things.

“We have some 600 males in the building. Our goal is to bring the number (of players in all levels of the football program) up to 130-140. We’re less than 100 right now. Yes, the numbers are down everywhere. Football takes the hit all the time, which is understandable with the concussions.”

“I had the opportunity to work a Heads Up football clinic at Northwestern a couple weeks ago and worked with USA Football. Our defensive coaches are teaching, even down to the Colts program, the exact same thing. The kids hear the same thing over and over, and as long as they execute over and over, we’re going to make it a safer game. The other aspect is that it’s a violent game. There are going to be hard hits. That’s the nature of the beast.”

Q) Where is the bar set? Playoffs? Conference?

“Playoffs are always a goal. I love the fact that in football, you have to qualify for the playoffs. You have something to point to that motivates the kids to put in that extra work. That should always be the goal.

“Our conference is going to be pretty challenging . For the Fox Valley (Fox) for two more years, a goal for a conference championship is fair, but having the goal to win five games and make the playoffs is maybe more realistic. It doesn’t matter who you beat. If you win five you’re in the dance.

“We’re going to step on the field with the mentality that we can win every game, and we’re going out there to play our best. In the end, whatever the score shows, if we played the best we could, we walk off as winners.”