With Broc Rutter back under center and a deep receiving squad to boot, Neuqua Valley plans to continue its aerial assault that wreaked havoc on opponents last season. 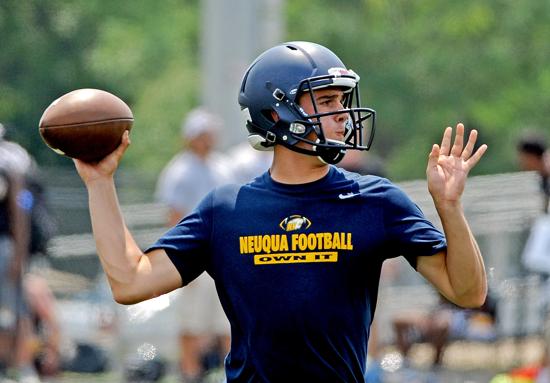 The Wildcats figure to be airing it out again this fall, because they have the most prolific quarterback in program history back in Broc Rutter.

For Neuqua's Class 8A quarterfinalist last fall, the 6-2, 195-pounder set school records for completion percentage (62.2), passing yards (2,167) and touchdown passes (30). The scary news for opponents is he could be better this season.

"I think the game has slowed down even more for him," Wildcats coach Bill Ellinghaus said of the Indiana State recruit. "He makes great reads and great decisions on the field."

That will be critical this season. These Wildcats — No. 6 in the Sun-Times Preseason Top 25 — do not have a single go-to guy like Dudek, who had 69 catches and 19 touchdowns last season.

"It's obviously different when you're going to spread the ball around a little more," Ellinghaus said. "We've got to make sure [Rutter] is reading defenses even more than he's had to do."

To provide some variety in the offense, the Wildcats will look to the running of a pair of seniors: Dominic Muoghalu (5-9, 185) and Aurora Christian transfer Kimani Mobley (5-6, 155).

"We're a little different than we have been in the backfield," Ellinghaus said. "We've got some slashers."

"They're both totally different types of backs," Rutter said. "It'll be hard to game-plan against them. Teams are really underestimating how well we'll be able to run the ball this year."

The defense also is more seasoned in 2014. "Last year, we were younger than we would have liked," Ellinghaus said.

"The senior leaders from last year ... they're ready to show people we're not just an offensive team," Rutter said.

There aren't any starters back on the defensive line. "But we feel we've got some guys who've played well," Ellinghaus said.

The same is true of the Wildcats since their coach's arrival in 2012. They hadn't won more than nine games in a season or gotten past the second round of the playoffs before that, but went to the 8A semis and went a program-best 12-1 two years ago.

Neuqua was 10-2 last fall and has been knocked out by the eventual state champ both seasons.

Ellinghaus isn't going to judge his team's success solely on whether it wins a state title. But, he said, "I think that is certainly one of the goals you throw out there because you're always striving for that.

"I hope to be in the mix and give ourself a shot."