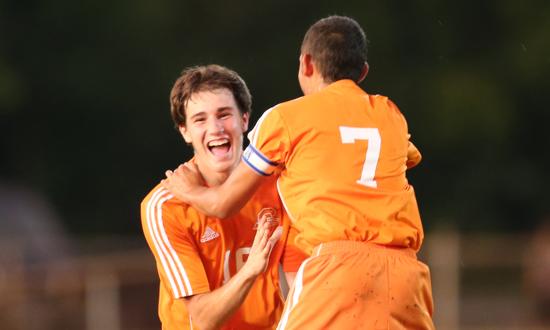 “It was incredible,” Dusek said. “This was a huge improvement and a huge accomplishment for us and a great start.”

It was an impressive victory against a Chicago Christian squad that won a regional title in 2013 and tied the Astros in last year’s season opener.

“It’s a step in the right direction,” Shepard coach Tim Eyer said. “There are higher expectations this year and I think the guys are responding well. They’re looking at it as having a greater responsibility this season.”

Dusek beat a defender to an Edgar Madrigal cross off a corner kick in the fourth minute and poked it towards the goal. Chicago Christian goalie Jim Bruinius (8 saves) dove on the ball, but it was ruled to have already crossed the goal line.

“As soon as I saw him dive on it, I threw my hands up in the air and the ref gave me the goal,” Dusek said.

Chicago Christian hung tough for the next 45-plus minutes, but a big momentum swing occured with just under 27 minutes left in the match.

The Knights came close to making it a one-goal game as Caleb DeRuiter got behind the defense and fired a shot that Shepard goalie Isaac Hernandez was able to stop with a sliding kick save. DeRuiter tried a back-heel shot on the rebound, but it was blocked.

The floodgates opened from there as Shepard scored three more goals in less than four minutes, two from Mike Kaczmarczyk and one from Logan Dolehide.

Adrian Olivares added the seventh goal with 5:39 to go.

“I love playing against Chicago Christian,” Dolehide said. “I play with a lot of them on club. This was a great start for us.”