Change is in the air at Round Lake, and it’s evident on the practice field

Three things you need to know about this Round Lake High School football team, all of which suggest better days are ahead for a program that was 1-8 last year. 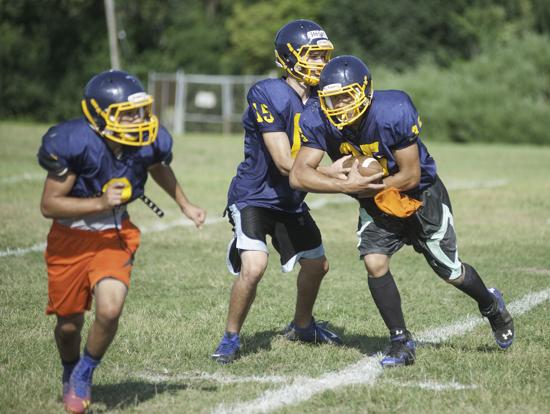 (from left) Round Lake's Noah Castillo, Cole Steger and Chris Perry during practice Friday afternoon at the high school in Round Lake. | Michael R. Schmidt~ For Sun-Times Media

Three things you need to know about this Round Lake High School football team, all of which suggest better days are ahead for a program that was 1-8 last year and hasn’t won more than one game in a season since 2006:

■ The numbers of players have not improved dramatically — yet — but there is still a night-and-day difference between Round Lake football today and two years ago when the Panthers were in the middle of their second double-digit losing streak in six years.

■ This group will not physically overwhelm anyone, but there’s a physical and mental toughness that hasn’t been seen in some time at Round Lake.

■ If this team can carry that toughness through the end of the season and pass it along to the players at the lower levels, the season will be a success for Round Lake as a program, no matter the final win total.

Jordan Eder, the youngest head coach in the area at 26, is a 2006 graduate of Antioch High School and is in Year No. 2 at Round Lake.

Here’s what he had to say on how far the Panthers have come, and how far they still have to go:

■ Q: What was with the football team becoming the track team?

Eder: “We had most of our guys out in track, so we got a lot faster and a lot stronger. It was a really good offseason. We had maybe 70 guys turn out (for track). We’ve been working together with the track program, to help each other. (Kevin Brady, the track coach) and I sat down and worked it out. Where I was before, at Grant, they had a big turnout. (Grant football coach Kurt) Rous was also the track coach at the time, and he always had guys coming out. At Carmel they always had guys doing both. It’s running and lifting, and those are two big components of football.”

■ Has track made a difference on the football field?

Eder: “The track helped a ton. A lot of guys got a lot faster. We were the slowest team last year, and it hurt us, but now we’re moving pretty well. We had (the linemen) throwing and running. A team would come here for track, and we’d have 40 guys running the 100. They’re not going to win it, but it was something to keep them running and in shape. We’re not the biggest team, but we’re a lot stronger, but we’re moving around really well. We’re going to be flying around.”

■ Q) These don’t look like the Round Lake players we’re used to seeing, but are the numbers up?

Eder: “We have 36 on varsity, which is about where we were at last year. Program-wide, we’re up about 20 bodies. It’s been a good turn out. It’s really positive.”

■ What’s the mindset entering this season?

■ Q: How big a difference does being competitive make in attitude?

Eder: “It’s a huge building block. You talk to the team now when you’re running and lifting or at the parent meetings, and you have positive things to talk about. We were in games in the fourth quarter. It wasn’t like we got crushed every week. We had some ugly games against Lake Forest and Lakes, but those are top-notch programs. We’re not going to compete with them right away. It’s going to take some time, but last year was definitely a great building block.

■ What are those goals?

Eder: “Five (wins). Is that a huge step to take in one year? Yeah, but we’re coming out to win and compete, and we’re not going to roll over. We’re shooting high, and the kids have put all the work in. They’ve been outstanding. They’ve really bought into what we’re doing, and that’s the key.”

■ Who are the star players and the replacement for graduated QB John Ridley?

Eder: “Cole Steger. He was receiver last year, and a backup quarterback. This year, he will be our quarterback. He started two games when Ridley was hurt, and at the end, they were splitting reps. He’s had some experience, but he’s also worked his butt off all offseason. He’s looking good.

“Chris Perry is another big guy back. He’s starting at running back. He finished last year with eight or nine touchdowns and 500 yards, and he missed the last four games. He hurt his shoulder last year. He’s another guy we’re looking to have a big year.”

(Note: Other returners on offense are lineman Juan Diaz and wideout Josh Norkus. On defense, the Panthers return linebackers David Cordova and Diaz, plus safeties Alex Gibson and Omar Soto.)

“We have a lot of new guys, but the sophomores had a good year with a lot of pieces who are stepping in (as juniors). We have two sophomores starting on offense, one at center (Brett Heardman) and one as the other running back (Noah Castillo).”